The panel discussion was started by Mr. Haptarishi, who gave a brief introduction on how emerging technologies have a huge impact on the creative economy. Another student panelist Ms. Gopika gave a detailed explanation about how media is driven by the new advanced technologies and how it affects media content creation and production. Ms. Gopika also highlighted the key trends in the media and entertainment industry. Supplementing Ms. Gopika, another student panelist, Ms. Sakshi stressed about the technological trends influencing the media industry.

Ms. Rumi, the fourth panelist, gave a full explanation about the technological advancement that led to many changes in the field of journalism. She explained in detail about the dynamics of changing print media which is now referred to as traditional media, due to the ever changing adoption of new and advanced technologies. The panelists discussed the whole new change that was being brought in the field of media and entertainment industry. The panel concluded with students asking questions to the panelists. 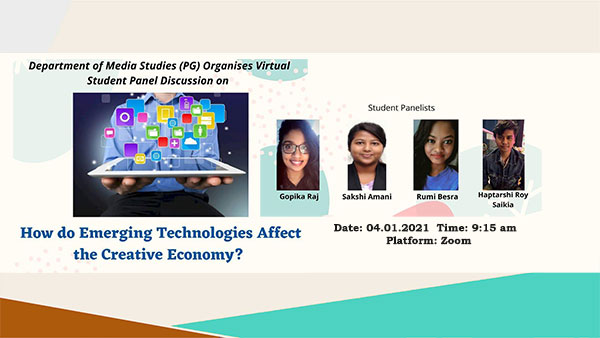 The discussion began with Ms. Gayathri, who spoke about the economic impact of the media. She elaborated on how the media is a big game changer when it comes to promoting or selling the goods and services in a country. ‘Media has the power to make or break anything or anyone’, cited Gayathri. The media is responsible for labelling certain things and lifestyles as the good life. This mass consumption leads to a boost in a country’s economy, in turn increasing the GDP. She elaborated on the three business models, namely monopoly, oligopoly and monopolistic competition. She pointed out how certain companies hold a larger share as compared to others and gave the example of Facebook, which is the social media giant in today’s time, owns WhatsApp and Instagram, which has a huge consumer base.

The next panellist was Mr. Shreyas, who spoke about the advertising industry and its economic benefits. ‘Advertising supports the core principles that shaped our nation: free speech, competition, and democracy’, quoted Shreyas. In a country in which consumer spending determines the future of the economy, advertising motivates people to spend more. By encouraging more buying, advertising promotes both job growth and productivity growth both to help meet increased demand and to enable each consumer to have more to spend. Shreyas then briefed the students about economic rationale to create, accept and use advertising. The session was then carried forward by Ms. Chanchal who spoke about how the media covers news related to the economy. According to her,” The media industry, whether public or private, plays an important role in any economy by garnering support or opposition for those who govern, by highlighting or failing to do so the views and/or sins of industry, by providing a voice for the people or not doing so, and by simply spreading economic information.” She pointed out how economic news impacts the perspectives and controls the choices of the masses of people. The effect that the media has on society and potential economic partners depend to a large extent on whom they reach. By providing easy access to information to users of public services, the media empowers citizens to demand quality and accountability from the governments.

Ms. Sherly concluded the panel discussion. She drew attention about how the media is affected by the economic growth of a country. ‘There is hardly any rigorous study about the relationship between the state of the economy and the state of the media’, she said. She focused on four major areas – import of newsprint and printing materials, fall in advertising revenue, news gathering expenditure and job security of journalists. She put forth these effects from an Indian perspective. She also shared the concerning plight of magazines and newspapers that have shut down operations due to shortage of funds. There are also no proper legislations concerning the pay of journalists or any pension schemes.

The panel discussion was then open to questions from the audience. 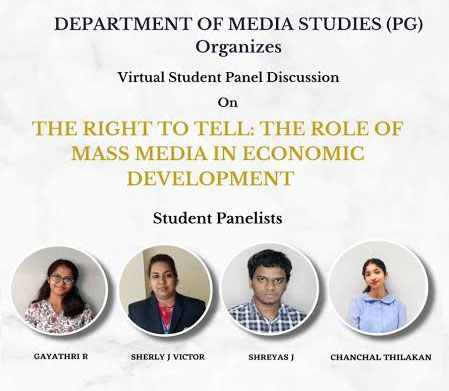 Altogether the panel discussion was very effective and insightful which helped the other participants and audience to know about different places and its aesthetic values which made the event successful. 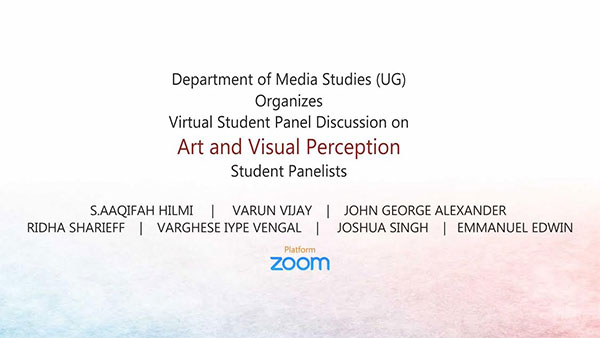 The panel discussion was started by Cassandra, who gave a brief introduction followed by Sreelakshmy, who gave a detailed explanation about the media and its socio-political aspects.

Cassandra talked about various types of media with panellist Mohnish giving examples about how popular culture such as movies, advertisements, shows, televisions and other media have affected our social and political scenario.

Another student panellist, Shubhangi discussed the major impacts of media on society and politics. The panellists went on to discuss the positive as well as the negative impact of media. The panel concluded with students asking questions to the panellists. 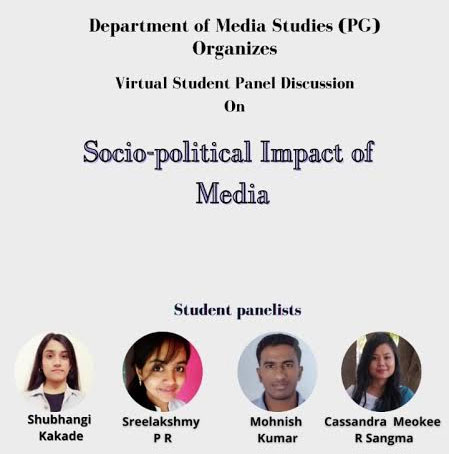 Student panellist Andrea opened the session with an introduction of the origin and history of cultural imperialism, cultural hegemony, and globalisation. She explained in detail the history behind cultural imperialism and how it has impacted the process of globalisation. She put forward a question in between her session to one of her panelists to suggest a few examples on today’s communication system like the Internet.

The next panelist, Anjana talked about the communication process, how English language influences other forms of communication. She further explained that cultural imperialism is closely related to global communication. She said the fashion industry is the trendsetter of the current world, there’s also a change in the food culture and the media.

Another student panellist Swetha took over the session to talk more about the impact of television, advertisements, food, dress, film, McDonaldization and yoga. She highlighted the promotion of Ayurveda as part of the globalisation process.

Abhiram, a student panellist concluded with an insight on the positive and negative aspects of cultural imperialism on media culture and summarised the whole idea given by other panelists.

The Question and Answer session was followed after the panel discussion. The audience asked questions to the panellists ranging from the role of indigenous products in bringing back our culture and ideologies to views on AYUSH doctors being allowed to do surgeries by the government.

The questions gave an insight into the discussion to everyone present at the session.. The discussion also elicited valuable feedback to the student panellists as well as to the audience. 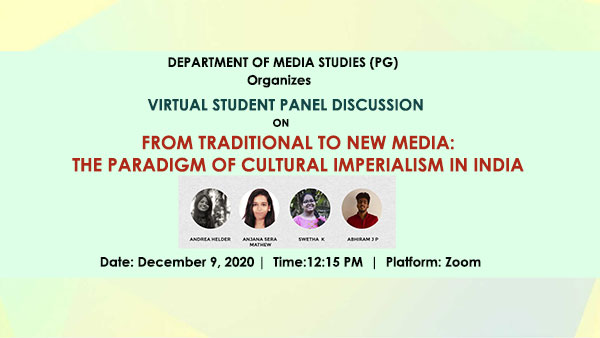 The student panelists were Andra Filina, Lakshmi Muralidharan, Mahalakshmi, Marvi Muskan and Abin Babu of first semester MA JMC. The panel discussion began with Ms. Lakshmi Muralidharan giving an introduction on what commodification of news means. She stressed on the functioning of capitalism and commodification of news in the media. She said that digitalization of media production is leading to the hollowing out of media as one of the central pillars of democracy. As a result of this, sensationalism in news has led to decline of credibility of news and information being provided to the audience.

The session was followed by Ms. Marvi Muskan where she spoke about commodification of women in the media. Media is seen to objectify women and that has an impact on the society the society as whole. For example dropping out of education, women face depression, low self-esteem by comparing themselves to women shown in the media termed as ‘beautiful’. She highlighted the examples where women are portrayed in a positive manner in media like Ariel matic advertisement where it shows that household chores are not only women’s job. Media can influence the audience hence it should portray women in a positive light and not as an object. Ms. Mahalakshmi spoke about the effects of communication, ethical aspects of journalism, paid news, and the people's choice of news trivial due to commodification of news. She said the media's role as a marketplace of ideas is truncated, leading to gross failure in performing the traditional functions of the media and quality of information and public enlightenment is compromised.

Mr. Abin spoke about how we have to look at news commodification and concluded the panel discussion with the vote of thanks. 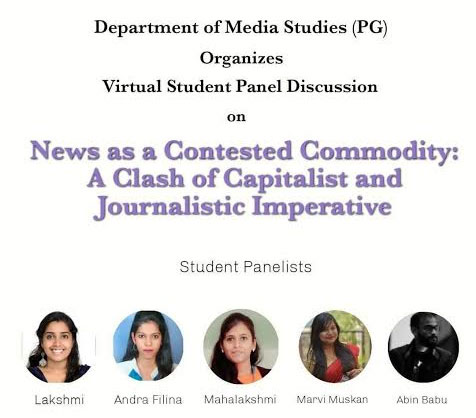 The one-hour discussion began with Ms.Erica enlightening on the topic “Trends in Corporate Communication”. She said that sharing information with target audiences at the right time is essential for building a brand value, and cementing its reputation. She also said communication professionals have a good opportunity to manage flow of communication with external and internal audiences. Ms. Dixith highlighted the trends of using mobile apps that enabled effective internal communications within an organization.

By the end of the discussion, the audience posed several questions and were answered by the panelists. The discussion ended with the feedback given by Dr. Juby Thomas. 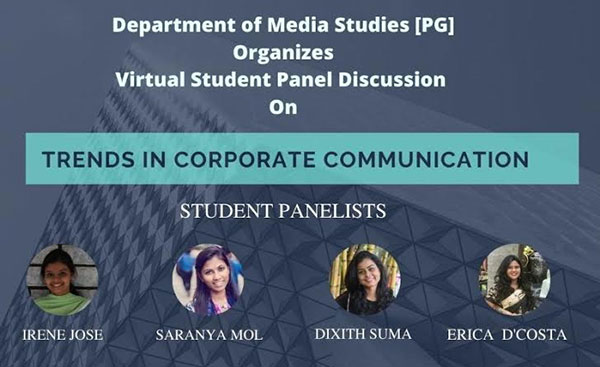 The discussion began with an introduction of the topic by Mr. Abey Jacob explaining what is Ethics and Ethics 2.0. He explained that the ethics are the major principles and guidelines to be followed by every organization for a better growth and work environment. Ms. Linga Bhavani discussed the principles of the ethics in corporate communication which are integrity, loyalty, confidentiality, courtesy, fairness, respect and concern and how they are useful in building relationships with each other and telling the truth is always just the start. She explained that business ethics must be at the core of relationship building, whether between individuals, companies, or a firm and its customers and community.

Panellist, Mr. Gopinath explained the benefits of the corporate ethics. The discussion covered different kinds of benefits that could be attained by an organization by being ethical. Mr. Akhil T Mijesh brought in the importance of laws in the corporate world and also discussed the various kinds of ethical violations that are happening around the world.

After the explanation by the student panellists the platform was open for discussion and the other participants shared their thoughts and viewpoints and also their doubts on the topic. 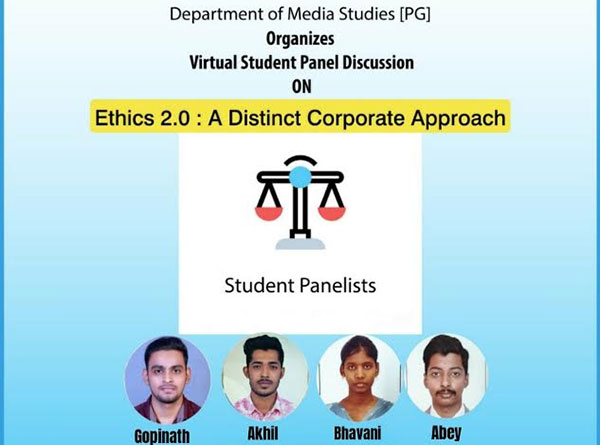 The panellists talked about the meaning of corporate advertising, its types, importance and controversies related to it as well. Bal Francina highlighted the relevance of corporate advertising during these difficult times. She explained how large corporations responded and did their part in helping those in need. Big corporations like Ford and SBI made substantial contributions as well as helped the communities impacted by the pandemic.

“We adopted the virtual panel discussions for the postgraduate students with an aim to nurture their public speaking skills. The Q & A discussion in the panel allows the panellists to creatively involve and engage with their peers. It also acts as a beautiful platform for the MA Journalism students to engage with people on various issues, and also gain experience in planning and facilitating an event. I am extremely happy with the efforts taken by the students to make effective discussions to empower themselves and others.” said Dr. Juby Thomas Programme Coordinator, Department of Media Studies.

"The panel discussion gave us insights about corporate advertising and its use in today's world. It was an in-depth discussion providing the tools and techniques used by companies to promote their identity and brand credibility", said Malavika Surendran, student, Department of Media Studies (PG).

The panel discussion ended with a Q & A session where the audience asked questions to the panelists regarding the subject and also added inputs from their side as well. 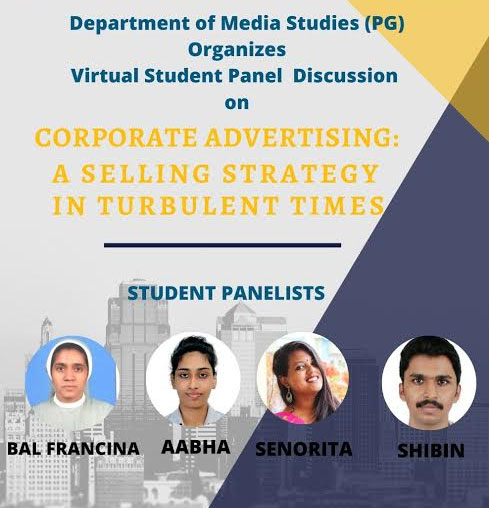 Applications for Karnataka State Minority Scholarships for the academic year 2020 - 21 is open. [CLICK HERE FOR MORE DETIALS] | 56th Annual Convocation of Bangalore University [CLICK HERE FOR DETAILS] | Download the ( Kristu Jayanti + ) App for easy access and to keep yourselves updated with the latest news & activities on the campus. Download from Google Play store (android devices) and app store (Apple devices).|