Oberiu 2020 - Intra Collegiate Literary Fest (Ad astra per aspera)
Department of English (PG) organised the fourth edition of the Intra Departmental Literary Fest, Oberiu 2K20, on November 4, 2020. The chief guest for the day was Ms. Roshni Dinaker, a film director and a fashion designer, who has carved a niche in the Kannada, Tamil and Malayalam film industries since 2002.

The program was held on an online platform. Dr.Fr. Augustine George - Principal of Kristu Jayanti College addressed the gathering by explaining about the four pillars of the college (knowledge, skill, value, and attitude) and advised students to improve themselves holistically

Ms. Roshni Dinaker, the chief guest opined that Oberiu 2K20's key ingredient is 'good competition' and a ‘healthy exhibition of talents’. She also talked about ‘the need of expression and defined it as something that bridges one mind to another.’ Ma'am rued that people are not empathetic today and the world is missing true expressions. She encouraged the students by saying "...you are the future.Co- existence should be the key and communication should be the bigger factor...” Ma'am concluded her words by advising the students to use opportunities astutely.

Krishnaveni, a first year student, stated - "I was deeply grateful to Ms. Roshni Dinaker for addressing us. Ma'am truly inspired us and her positive energy carried us through the day. I also appreciate the staff fest coordinator Prof. Susan Sanny, the student coordinators Ms.Keziah and Ms. Minnu for conducting this wonderful fest for all of us. Looking forward to more such upbeat occasions!!!”

There were 64 active participants for the session, which included the Senior and Junior batches of the Post Graduate -English Department as well as the Faculty members of the department. 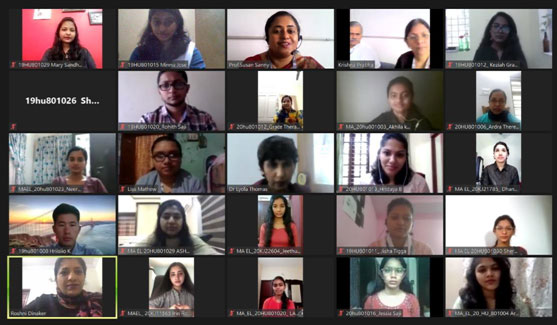 Oberiu 2019 - Intra Collegiate Literary Fest
Class: I and II MA English Literature
No. Of Students: 53
Date: 25.09.2019
Objective: To showcase the creative and the intellectual dimensions of the young literati.

The Department of English (PG), Kristu Jayanti College (Autonomous) organized the third edition of Oberiu, the Intra collegiate literary fest for first year post-graduate English literature students on 25th September 2019 for which the theme was “A Carnivalesque Ensemble”. The inaugural ceremony was graced by the presence of Mr. Melbin Mathew, an Associate news producer and reporter of Manorama news Tv. He addressed the students on the importance of being a part of the society and how significant it is to be a vibrant youngster who would be enthused to take up critical stands on social issues. The most awaited moment of the inauguration was the release of the second edition of the in-house magazine “Krysalis” by Rev. Dr. Augustine George, the Vice principal and the Chief Guest, Mr. Melbin Mathew.

The fest steered by Prof. Susan Sanny, Faculty –fest coordinator of Oberiu, witnessed the I MA students exhibiting their intrinsic talents. The entire class of I MA was separated into five teams namely Kratos, Ukiyo, Dunamais, Meraki and Fika. The teams competed amongst themselves to win the coveted overall championship.

The valedictory session of the fest was graced by Rev.Fr. Som Zacharias, Director of Library and Infrastructure who spoke about how these cultural fests mould the students and create beautiful memories in a student’s ‘life. Team Meraki bagged the overall championship. The student coordinators of the fest Mr.Ansen and Ms.Nissy Thomas were appreciated with a token of love. All in all, the fest was a grand success.

The French class of II MA English Literature students organized a feast “Joie de vivre” On 15th of March, 2019. The feast was organized as the second edition, as a continuation of the Joie de vivre tradition from the last French batch. The feast was put together by the ten students in the class, with Joanna Emima as the student coordinator, and the students worked tirelessly under the guidance of their teacher, Dr. Lyola Thomas, who was the staff coordinator to make this event a success.

The Event started with the guests, the Dean, Dr. Gopakumar A. V, Dr. Jonas Richard, and the entire English PG faculty arriving at the venue, in Room No. 407 of the A Block. Sherin R. Varghese made a presentation on notable aspects of the French Culture. She introduced the audience to the French cuisine, French literary authors and their works, and few of the various aspects that one should be aware of to fully appreciate the French tradition. The feast progressed with each student explaining the dish they prepared and the teachers enjoyed the delicacies with much appreciation and commendation.

The event came to an end with every student reminiscing on the days and time spent together in the French class and the day got a little emotional towards the end. The fest was a grand success and will forever be a day we look back upon fondly, as the day we were all brought together by love and food in true French Tradition. 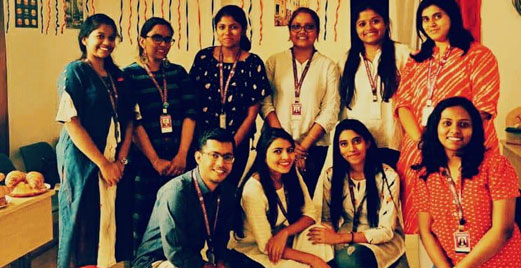 INTRAFEST OBERIU 2018
Objective: To find the creativity and talents of our young literati

The Department of English (PG), Kristu Jayanti College (Autonomous) hosted the second edition of Oberiu, the intra department fest for post-graduate students on 24th September 2018 with the theme of “Union of Arts: Celebrating the Renaissance”. The day was blessed by the gracious presence of Ms. Janet Orlene, a celebrated poetry slam artist and an experiential educationist who about celebrating life to the fullest and narrated practical examples from her life to facilitate a reawakening in the young minds. The second year students came up with ten events namely Quizzard, Jam, Quipster, Petalis de Poetica, Masquerade: Through the Ages, Cantus Canticum, Quipster, Avatar: The Cosplay, Ubermensch, Chroros. The highlight of the day was the release of the first edition of the in-house magazine “Krysalis” by Rev. Fr. Josekutty P. D, the Principal.

The fest came to an end at 5. 25 p. m with the valedictory function graced by Rev. Fr. Augustine George, Vice Principal, who emphasized the significance of cultural fests in the life of a student. He gave away the prizes to winners, with the team Giovanni Gabrielli walking away with the overall championship by scoring the maximum points.

INTRA-COLLEGIATE FEST
17th January was a golden day in the history of Post Graduate Department of English, Kristu Jayanti College as it marked the inaugural of Intra Collegiate fest- OBERIU meaning ‘union of art’. Impregnated with the thoughtful insights, the final year students came up with eight events namely Paper presentation, Facium Pictura, Just a Minute, Poetry slam, Quintessence, Theatre du Travail, Bohemian Euphony and Frankenstein. The fest was introduced to the other Post Graduate courses through the stupendous drama put forth by the organizers with an idea of promoting the same. OBERIU came into light with flying colors when declared open by an eminent artist Shri C.F. John who further enlightened the literati of how to ignite the spark of writing in everyone.

Result of the Build your Micro Terrarium competition [CLICK HERE FOR RESULTS] | Download the ( Kristu Jayanti + ) App for easy access and to keep yourselves updated with the latest news & activities on the campus. Download from Google Play store (android devices) and app store (Apple devices).| 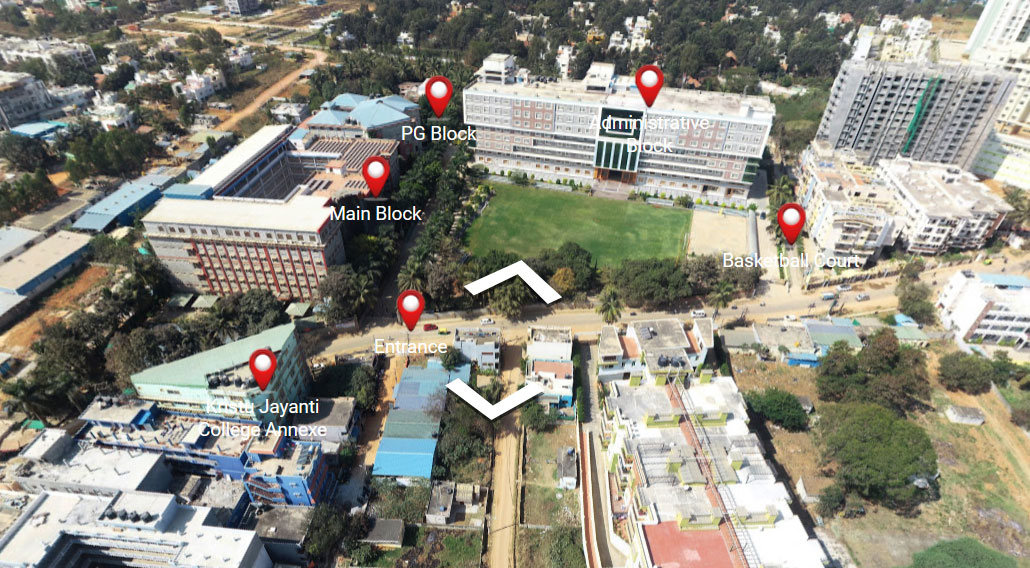