Experiential Learning A Theatrical Production on Silence! The Court is in Session


Experiential learning as part of teaching pedagogy, theatrical production was organised to develop students’ theatrical skills. Since the play ‘Silence! The Court is in Session’ was part of their curriculum (Indian Writing in Translation), Students of second year BA PSEN and PYEN wanted to enact the same on the stage under the guidance of Dr Masilamani C. It was directed by Sarayu from PYEN.

The play was performed by the cast of 12 members. The whole play took place in MOOT COURT of Law College. This play presents a metaphorical trail between the humanities and the anti-humanists. The play is in reality a mock trail of simple and straightforward school teacher Miss Leena Benare. She is cross examined in the court with full mockery. She is charged with infanticide and having illicit relations with a married professor Damle and in this way her private life is exposed. All the other characters witnesses like Mr.Ponkshe. Mr. Karnik, Smant, counsel for the Defence and Counsel for the crown Mr. Sukhatme and Judge, Mr. Kashikar and his wife Mrs. Kashikar all behave in a way of mockery.

Above all, it was overall a great show and was enjoyed throughout by the audience and the cast. The cast made best use of the resources available and the teachers of the department commended highly about the performance of the students and finally it turned out to be the greatest show.


On November 30th, 2021, the Department of English (PG) held ‘Sangam’ as part of the Theatre production in Saint Kuriakose Elias Auditorium. The event was graced by Dr. Pavithra faculty a multi-faceted, talented personality in the sphere of theatre along with the coordinator of the department Fr.Joshy Mathew and other professors of the department.

The III MA students of English department put up a play on the topic ‘Stereo typicality’ with the theme “breaking boundaries in the quest for self”, one of the major contemporary issues aiming to create awareness and bring out a positive influence amidst the students and enable students to be change makers in the society.

Dr.Pavitra appreciated the role of the college and the department for providing an appropriate forum for students to do activities that were beyond the boundaries of the classroom. The faculty coordinator for the event Prof. I. Stephen commented that ‘it was a kind of lived experience that was something common to all and portrayed efficaciously.’

Ms. Andriya Vilayil Biju a first year student opined that ‘the theatrical performance was insightful and informative and was much appreciated by the post graduate and under graduate students as well.’ 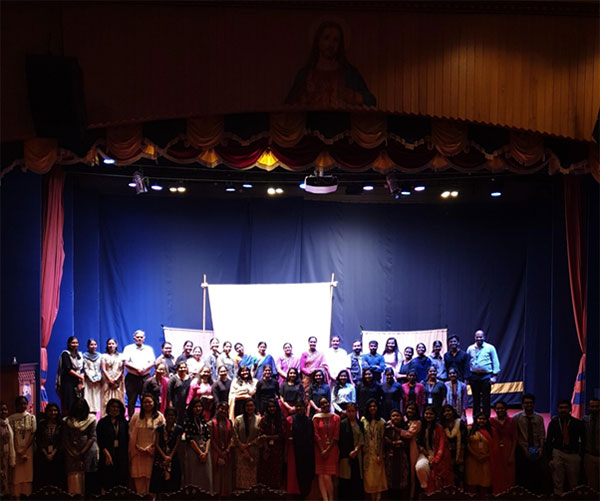 Sangam: A Salutation to the Rivers of India


The Department of English (PG) organised a theatre performance titled Sangam: A Salutation to the Rivers of India on 9th of October 2019, highlighting the deteriorating condition of the major rivers in India. The objective of the theatrical performance was to spread awareness about the dying rivers and to come up with a resolution to save the water bodies. The programme was honoured by the presence of Rev. Fr. Emmanuel P. J., Director of Kristu Jayanti College of Law and several faculty members from other departments of the Kristu Jayanti College.

The theatrical performance included a drama along with five dance sequences. The characters acted as the rivers and showed how rivers were venerated earlier and the current state of the rivers, particularly river Kaveri, Ganga and Brahmaputra. The dance drama was performed by the first year as well as the final year students of English Department (PG) which was supervised by Mr. Jeremy Solomon, Theatre Artist and alumni of Kristu Jayanti College. There were a number of props made by the students with recyclable materials. The dance drama ended with a pledge to save rivers and other water bodies.

Positive and heart touching feedback was received from the dignitaries and other members of the audience. A few selected quotes:
“All the performers were so involved in their characters, that it made us feel regretful and guilty thinking of the conditions of the rivers in India.” ~ Rev. Fr. Emmanuel P. J., Director, Kristu Jayanti College of Law

“The dance drama was very informative and I really feel that protecting nature should be one of our main concerns. It was a really great initiative taken by the English Department to raise this issue. Great work!” ~ Sristy Chhetri, MCJ Student

This was the first edition of theatrical performance presented by the Department of English (PG) which created a huge impact on the audience. The performance set a benchmark for the other students as it excelled in all the areas of fine arts. It also gave out a social message to the audience to retrospect on the exploitation which destroyed the sacred rivers of India. The spirited participation of the performers helped them to bring their skills to the forefront.

Seba Saji, a first year student of MA English Department, shared her experience as a performer, “It was a thought provoking programme. I appreciate the hard work and dedication of each of the members of the department. A well presented art of emotions. I was happy to be a part of it.”

The theatre production organised by the Department of English (PG) had more than 100 spectators from different departments who enjoyed and enthusiastically appreciated the performance. 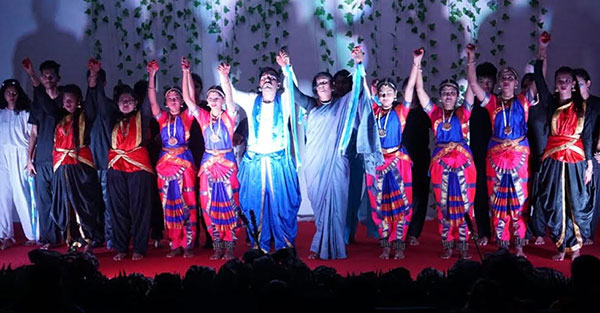