Media Conference on Gender Identity and Changing News Paradigms
The Department Of Journalism and Mass Communication of Krist Jayanti College organized the third edition of the national conference on the topic Gender Identity and Changing News Paradigms on February 19 & 20, 2019. Ms Ammu Joseph an independent journalist and author was the chief guest of the day.

Ms Ammu Joseph also spoke about media pluralism defining it according to a recent definition - a scope for a wide range of social, political and cultural values, opinions and information to find expressions through the media. “In order to enjoy freedom of expression, rights and gender equality; include men, women and members of sexual minorities to participate in multiple roles at multiple levels in the media. Let them to express themselves through the media and to determine the nature and content of media,” said Ms Joseph.

Ms. Ragamalika Karthikeyan, Deputy News Editor, The New Minute spoke on Gender Sensitivity and Gender Balance in News Coverage said “putting common sense into practice will help to become sensitive towards the source.” The session on Changing Paradigms in Advertising by Ms Meera Jyothis Prem, Senior Creative Director, McCann Erickson & Film Maker focused mainly on how advertisements have been portraying women along the years and also the changes in the ways of their portrayal.

Shri T R Gopalakrishanan, Former Editor, The Week spoke on Changing News Paradigms. He commented despite of the change in technology, the content of a good story remains a same with journalistic values, such as accuracy, precision, context etc. he emphasized the need to humanize the news stories.

Dr. M B Jayram, Emeritus Chairman, PRCI said that the young communicators have a great role to bridge between the government and people. He also said how public sector has changed and has become more effective with the latest innovations in digital communication.

International Conference: Reflections and Refractions on [Dis]ability
A two day International Conference on Reflection and Refractions on Disability was organized by the Departments [PG] of English, Psychology, Social Work and Journalism and Mass Communication, at Kristu Jayanti College on 1 February 2019. Dr. S.K. Prasad, Director and Deputy Commissioner, Member of the Planning Board, Academic Council and Research Council; Dr Thomas Abraham, Honourary Associate Professor at Journalism and Media Studies Centre, Deputy Editor of the South China Morning Post, Hong Kong and Dr Malavika Kapoor, Professor of National Institute of Advanced Studies and former Head of Department, Clinical Psychology at the National Institute of Mental Health were the guests of honour. The conference aimed at providing an interdisciplinary platform for the researchers, academicians and practitioners to deliberate the concerns, challenges, innovations, trends and solutions in the related fields. Dr S.K. Prasad elaborated that every person is abled or disabled considering the circumstance. He commented that it is the thinking of the society disabled, not the person. Dr Prasad explained the United Nations Convention which enacted the Persons with Disabilities Act 1995 providing equal opportunity and full participation to lead a life without discrimination.

Dr Malavika Kapoor explained the factors that are causing disability in people. She briefed on mental health, physical impairment and developmental delays which affects the ability of the people. ‘We have to work with each level of workers; teachers need to be trained to attend to special need children and must collaborate with parents to help them,’ said Dr Kapoor. 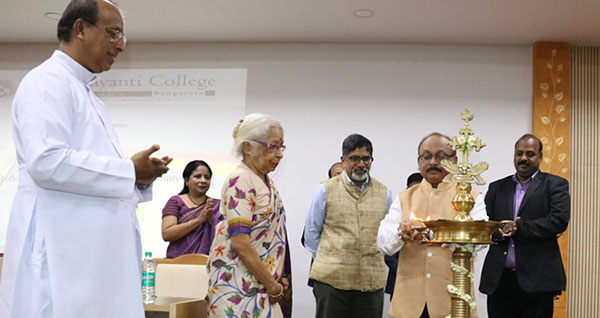 Seminar on “Advanced Reporting Writing” by Mr Pradeep Nair
The Department of Journalism of Kristu Jayanti College organised a seminar on “Advanced Reporting writing” for the PG students on 10 January 2019. Mr Pradeep Nair, News Editor at The Hindu was the resource person. He explained different types of news, style of writing, maintenance of credibility in writing to the students in detail in his session.

The session started by introducing different types of news stories and the style of writing in each to the students. He shared tips to find news stories and the importance of maintaining credibility by giving attribution to the sources in the stories. “Attribution is very important in journalism. It enhances credibility to your story” he said. Mr Nair e also spoke how correct attributions are a means to counter fake news. “Publishing the source can be avoided if the information is very much sensitive, but should be revealed to the Editor-in-chief of the news organization “he added.

He introduced a new variety in journalism “Data journalism” as a career option for the students which gives them the opportunity to go deep into the story. He also encouraged young aspirants to make use of western publications for reading which helps them in bringing innovative style into their writing.

Kannada Seminar
Department of Kannada organized a seminar on ‘Tejaswi Sahitya: Sanskrutika Mukamuki’ on September 08, 2012. H.S Satyanarayana, Lecturer, Government Junior College, Varthoor, Bangalore was the Speaker for the day. He narrated that Tejaswi was very practical by his nature and very active in his childhood. Tejaswi had an attitude of ignoring something which is not suitable for him. His father encouraged him to grow in his own way. That’s why we have Tejaswi as a great Zoologist, good writer and marvelous photographer. “The life style of Tejaswi is model for our young generation and great inspiration if you read his writings.” He added.

Prof Charles Lavery discussed the scopes and the opportunity in the field of investigative journalism. As an award-winning journalist, he shared his reporting experiences in Afghanistan and inspired the aspiring journalist to take up challenges. He emphasized that “Being a journalist you have the responsibility that ordinary man doesn’t have. You should be the aware of what is happening and learn to make changes.”