National Level Intercollegiate Fest, “STIMULI"
The Department of Psychology organised a National Level Intercollegiate Fest, “STIMULI’’ with the theme “UBUNTU”- We Rise by Lifting others on 28th October 2022. The fest witnessed 156 participants across the country for various events like Brainstorm (Quiz), Silver Screen (Film Making), Charisma (Personality), Horus Thema (Theme Dance), Psycho-Mime (Mime), Bill Board (Poster making), Impromptu (Extempore), Snapshot (Photography). These eight exciting events were organised both on stage and off stage exclusively for the students pursuing the course in Psychology. The fest provided a platform for the students to exhibit their inner talents and passion for extracurricular activities.

The Chief Guest was Dr Meghana Singal, Founder- Raising Family Academy, Clinical Psychologist, and Parenting coach emphasised the theme ‘UBUNTU’ with life examples and how psychology has diversified career options which are gaining immense popularity as a field. PSG College of Arts and Science bagged the winners’ trophy for their innovative concepts in showcasing their talent for various events.

The feedback was positive, and students had a great time expressing their passion. Students were excited to be part of STIMULI 2022, which gave them an opportunity to foster insight among themselves.

Dr. Sandra Joseph, Principal, Jesus, and Mary College, New Delhi was the Chief Guest. She spoke about the need for taking care of one’s mental health, and the influence of various activities like painting, dancing, singing, cooking, and writing on well-being.

In his Presidential address Rev. Dr. Augustine George, Principal, Kristu Jayanti College (Autonomous) spoke about the importance of connecting with each other to benefit each other. He said that the use of technology and digital platforms are at its highest but the combination is effective only if we combine the technology with the right human skills. Innovation is creative destruction but depends on the human adaptability to reskill and upskill oneself.

During the valedictory function, Rev. Fr. Emmanuel P.J., Director, Kristu Jayanti College of Law, delivered the Valedictory address where he appreciated the participants who came forward to a seemingly intangible and impersonal event and made it special, enriching each other with their ideas, thoughts, and performances. He also emphasized the need to express care, gentleness, kindness, and gratitude to one another even in the midst of the pandemic.

The results for the events were announced, with enthusiastic applause and encouragement from the audience. Indian Institute of Psychology and Research (IIPR), Bangalore won the Overall Championship, and Christ (Deemed to be University), Bangalore won the runners-up trophy. 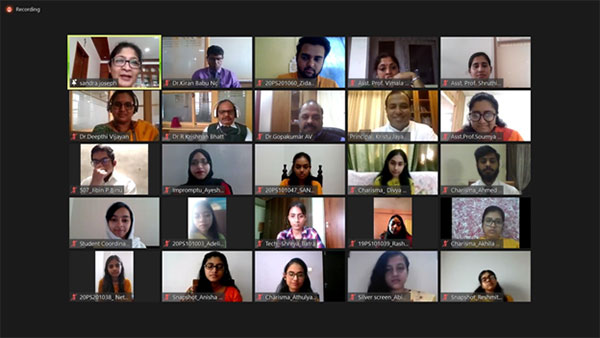 Dr. Binoy V. V, Assistant Professor, Animal Behavior and Cognition Consciousness Studies at the School of Natural Sciences and Engineering, was the chief guest for the day. He spoke how inclusion is essential for a diverse system.

He ended his interactive talk by reminding the audience to include “thinking machines” and to be prepared to compete with them as well.

Rev. Fr. Josekutty P D, Principal, Kristu Jayanti College, in his presidential address spoke about the importance of accepting all aspects of the society to live in harmony with others.

The various events started off simultaneously in different venues with participation from 11 colleges across the country with 151 participants. The events of the fest included a variety of on-stage and off-stage events such as Charisma, Snapshot, Hours Thema, Psychomime, Billboard, Brainstorm, Persona and Silver screen.

During the valedictory function, Rev. Dr. Augustine George delivered the Valedictory address where he spoke about hard work, winning attitude and success. He also congratulated the participants for their active involvement in the fest. The results for various events were announced, with enthusiastic applause and encouragement from the audience.


The 8th Annual Intra-collegiate psychology fest was organized by the Department of Psychology on 26th August 2019 from 9:00 am to 5:30 pm to inculcate the application of different streams of psychology through various extra-curricular activities. Every year this fest is conducted by the students who are pursuing their post-graduation in Psychology for the undergraduate students of psychology. The theme for this year’s fest was “Embracing Inclusiveness”, making the students understand the need for accepting every aspect of our society.

Cognizance 2019 Was inaugurated by the Chief Guest Dr. Jini K. Gopinath, Chief Consultant, Clinical Psychologist at Mind Matters and former Mumbai Indians Performance Coach. In his inaugural address, Dr. Jini K. Gopinath spoke about the amendment made by the Government of India to restructure the disability segment and to introduce “inclusive” education for special kids so that they feel they are as normal as the rest. Secondly, he spoke about the incidence rates of cardiovascular disorders based on a study by Narayana Hrudayalaya and St. John’s Hospital, Bangalore, which concluded that the old scales that were used earlier does not apply to the current generation as the primary factor that contributed to CVD was found to be stress. Lastly, he put forth the importance of personal therapy for Psychology students and practitioners to protect one from the emotional burnout.

A total of 481 undergraduate students participated in the event. The participants were put into 10 different teams consisting of the first, second and third-year students, each team was named after an Indian Psychologist who contributed immensely in different fields of psychology. These teams participated in over 8 different- on stage and off stage competitions such as -

The valedictory session was chaired by Rev. Fr. Lijo P Thomas, Financial Administrator, who appreciated the department for the successful conduct of the event and also congratulated the participants and winners for their active participation. The event ended with the prize distribution. Cognizance 2019 provided the students with the platform to showcase their talents and organizing skills. The winners were overwhelmed as they were awarded with trophies and certificates for their excellent performance.

Dr L N Suman, Head, Department of Clinical Psychology was the chief guest for the day. She congratulated the team for organising a psychology fest and appreciated the effort taken by the organisers and participants for the fest.

“The fest is a platform to hone your skills in order to prepare you for the real world. You need to have a goal and focus. That will help a person to know they are doing, how well they are doing and how to improve it,” said Dr L N Suman.
She explained how the world will offer a lot of barriers and troubles, external and internal obstacles and the need to face and overcome it in life.

Fr Augustine George, Vice Principal, Kristu Jayanti College who delivered the presidential address spoke about the importance of fests as a learning experience. He remarked that one can share and receive ideas and establish networks through fests. He said “These fests help to find the core competence in each one of us. Through involvement and commitment I believe you are enhancing your learnin.”

Following the inaugural session, the fest was declared open during the promotional event by Rev. Fr. Augiestine George, Vice Principal, Kristu Jayanti College. Then the various events started off simultaneously in different venues. The fest witnessed participation from 14 colleges across the country with 108 participants. The events of the fest included a variety of on-stage and off-stage events such as Charisma, Snapshot, Hours Thema, Psychomime, Billboard, Brainstorm, Persona and Silver screen.

During the valedictory function, Rev. Fr. Emmaneul P J, delivered the Valedictory address where he shared the history of Kristu Jayanti College and also explained the relevance of the fest in honing an in-depth skill in the field of psychology. Feedback session gave an insight about the students from other colleges where all were astonished by the hospitality and co-ordination in the fest that made it a grand success. Post the feedback session the results for various events were announced. Indian Institute of Psychology and Research, Bangalore bagged the overall trophy and the runner-up trophy was shared by Kateel Ashok Pai Memorial Institute, Shimoga and Surana PG College, Bangalore.


Date: 16th and 21st, August 2018
Time: 9am – 5 pm
The 7th Annual Intra-collegiate psychology fest was organized by the Department of Psychology to inculcate the application of different streams of psychology through various extra-curricular activities. This fest is conducted by the students who are pursuing their post graduation in Psychology to the undergraduate students of psychology.

The fest spanned over two days. On day 1, the students submitted the Photographs and Short Flims and also participated in the prelims for Brain Strom and Charisma, simultaneously the finals for Persona and Bill Board was held.

The final day of Cognizance 2k18 started of with the innagural session where Rev. Fr. Principle Josekutty P D, while delivering the inagural address applauded the team for having the tagline of “Think Beyond” because as a Psychologist it becomes important to think beyond what is obvious and through these extra curricular activities students are made to think beyound their regular curriculum. Followed by Rev. Fr. Principle, the Chief Guest of the day, Dr. Yesudas in his key note address spoke about the importance of letting go negative thoughts, he told we have to monitor our thoughts and gave an beautiful analogy where birds can fly over your head but we cannot let them make a nest there.

Following the inagural session the finals of Brain strom was held. After a sincilating rounds of Quiz, the students were awed by the silent performance of their friends in Psycho Mime. Post lunch the events resumed with finals of Charisma, where the participants were made to go through various rounds to show case their uniquness. The last event to happen was Horus Thema, where the students dressed up brightly danced in unison to showcase their flow of energy.

In the valedictory session Rev. Fr. Vice Principle Augustine George suggested that participating in the events are more importatnt than winning. He later on questioned the students “If given a chance to participate again how many will do so?” Father emphasized on to the relevance of the experiences gained and wanting to improve over and over as the important trait of a Jayantian. During the feedback session a student of Second year BA said she had gained confidence to speak in the public after participating in this fest last year.The valedictory program got over with the prize distribution ceremony. The overall champions of Cognizance 2k18 was team Melanoia and the runners-up was bagged by team Selcouth.

Cognizance 2016
The Postgraduate students of Psychology organized an intra-collegiate Fest Cognizance, on 24th August 2016 with the theme“Think Beyond”. The Fest was inaugurated by Dr. Manoj Kumar Sharma Clinical Psychologist, NIMHANS, Bangalore at 9.30 am in the Mini Auditorium II, who addressed the gathering about the growing need for awareness on using technology safely. The inauguration was followed by stage events which included Quiz, Spell Bee, Turn Coat, Personality, and Psychodrama. The off stage events included Face painting and Poster Making.

The winners were recognized and appreciated with the prizes during the valedictory ceremony presided by Fr. Lijo P Thomas Kristu Jayanti College.The fest concluded at 5.30 PM.

Cognizance 2015
“The foremost ingredient of being a psychologist is not understanding others, but it is understanding oneself,” said the Chief Guest, Dr. Tony Sam George, Director, Centre for Research, Christ University, as he addressed the gathering during the inaugural function of the annual intra Collegiate Psychology fest, Cognizance 2015 on August 18, 2015. The function began with a screening of an introductory fest video by the Department, which was followed by a short film paying tribute to the late former President of India, Dr. APJ Abdul Kalam. The function ended with a vote of thanks by the student coordinator, Benita Mohan.

Cognizance 2014
Department of Psychology organized an intra collegiate fest Cognizance – 2014, on 26th August 2014 with the tag line “Think Beyond”. The program started at 9:30 AM in the college Mini Auditorium. Prof Stella Annathani, H.O.D. Psychology, National College, Bangalore inaugurated the fest.