International Lecture on 21st Century Storytelling
December 8, 2021
A lecture was organized by the Department of Media Studies (PG) as part of its International Lecture Series on the 8th of December 2021. The topic of discussion was 21st Century Storytelling: The New Poetics – Aristotle meets Janet Murray. The resource person was Dr. Don Marinelli, co-founder of Carnegie Mellon, and Entertainment Technology Center (ETC) and professor of Carnegie Mellon University, USA.

Dr. Gopakumar A V, Dean of Humanities, Kristu Jayanti College welcomed the resource person by providing a brief introduction about his area of interest. He also expressed his gratitude for accepting the invitation for a session with students.

Dr. Don Marinelli was interested in theatrical play in his early years and eventually became a doctor in the field of drama. Until the mid-1990s, he was an associate head of drama. His interests switched from acting to computer science later on. He is an arts and media professor with a background in engineering, along with Kezia Shariff who is an Alumni of Kristu Jayanti College.

He enlightened the students about drama and storytelling focusing on the major aspects that are involved in storytelling. He stressed the importance of plot, characters, relationship, theme, diction, and various elements involved in drama and storytelling. His session was interesting and fruitful as he touched upon the modern additions of storytelling using new media technologies for the plot, crisis management, immersion, agency, and transformation. Dr. Marinelli posted a question before his audience as the most important question to ask when a person is involved in storytelling. He asked: “What is the story behind the story?” He made the session interactive by engaging the audience with some spelling exercises.

The professor compared the ‘old’ poetics of Aristotle with the ‘new’ interventions of poetics. He said “The old poetics are ranked. The plot is the most important element in the process of storytelling followed by character, theme, diction, music (rhythm). There is a science behind the plot and a plot has different elements like reversals, discovery, and recognition”.

The lecturer then narrows down to climatic plot structure and explained the concept of conflict or drama in storytelling. Dr. Marinelli ended the session referring to Janet Murray’s Immersion and Transformation. He explained the virtual and artificial reality by providing examples from “Harry Potter,” to state immersive creation. He also touched upon the areas such as the role of video games in immersion and symbolic drama.

It was an interactive session with 174 participants from diverse streams. The students from English, Computer Science, and Media Studies were glad about the session as the students got the opportunity to post questions and clarify their doubts about 21st-century storytelling. The session was concluded by a vote of thanks by Dr. Juby Thomas, Coordinator of Department of Media Studies, Kristu Jayanti College. The feedback from the students revealed that the session was very useful due to the importance of the topic discussed. 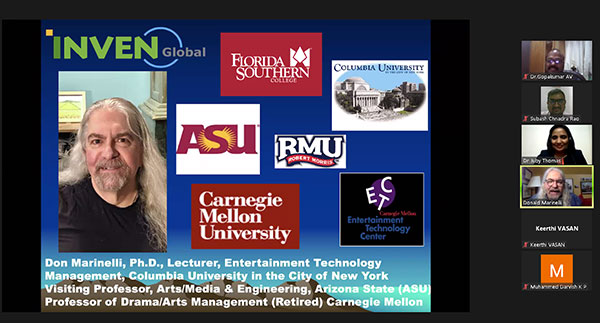 International Lecture Series on Ethnographic Research
Date: 28th of August, 2021
The Department of Media Studies (PG) in association with the Department of English (PG) organized a lecture as part of the, “International Lecture Series” on the 28th of August, 2021. The lecture was on Ethnography, -A Qualitative Research Method. The resource person was Dr. Selvaraj Velayutham, Associate professor, Department of Sociology, Macquarie University, New South Wales, Australia.

Dr. Selvaraj is specialized in the field of globalization, international migration, diaspora and transnationalism, race and ethnic studies, nationalism, multiculturalism, and the sociology of everyday life. He started the session by giving valuable insights on the factors that answer the question of, what is research.

He elaborated on the two broad categories of research, i.e., qualitative and quantitative research. He pointed out how both the methods have their limitations and advantages. He said, “With the quantitative method, you should have a good statistical background. While with the qualitative method the challenge is that, as a researcher you should be curious and should have skills to analyse people. You might have to work up a way to make people talk to you.”

He explained the concept of rationalization concerning the current Covid scenario. He spoke about the method of Ethnography which was originated in the discipline of anthropology. He spoke about its history and the essential aspects that are necessary while using this method. He enlightened the attendees on how ethnography can be used to explore structural and institutional factors in different research problems.

He explained the method with some short documentaries and case studies like IKEA shoppers. The documentary showed how IKEA’s maze-like spatial organization is a reason for its success among people. The session was very fruitful and Dr. Selvaraj got a lot of positive feedback from the attendees. The lecture concluded with a question and answer session, which was as insightful and helpful as the whole session.

Speaking on how the global order has changed during the course of the pandemic, Mr Kugelman said, “there was anxiety as well as great hope among people across the world to unite and fight against Covid 19 pandemic. But the initial cooperation and unity didn’t last long. Instead, it has resulted in creating instability in international relations”. He further added that the lack of collaborative effort, divisive and toxic nationalism created a vacuum for global leadership.

A specialist on Afghanistan, India, and Pakistan and their relations with the United States, Mr Kugelman spoke about how South Asia repositioned itself during the pandemic. He said that geographically South Asia is central to the world. South Asian countries has much to offer the rest of the world through its dynamic human resource¬. “Large youth population and growing middle class can contribute significantly to global economy”, said Mr. Kugelman. He also highlighted the issues dominating in South Asia and said, “disputes between India and Pakistan have paralysed South Asian Association for Regional Cooperation (SAARC). China’s growing influence in the region, its territorial provocation, Belt and Road Initiative and ‘wolf warrior diplomacy have further aggravated the tensions in the region”.

Speaking on India’s role in the changing world order, Mr. Kugelman said, “India should position itself as a ‘soft power’ rather than a ‘hard power’. It had taken the world’s center stage by playing a significant role in distributing pharmaceuticals and covid vaccines to various nations”. He concluded the session by speaking about the issues that could arise with the NATO nations military withdrawal from Afghanistan.

The session was attended by over 150 students from various streams like media studies, political science, sociology and economics. 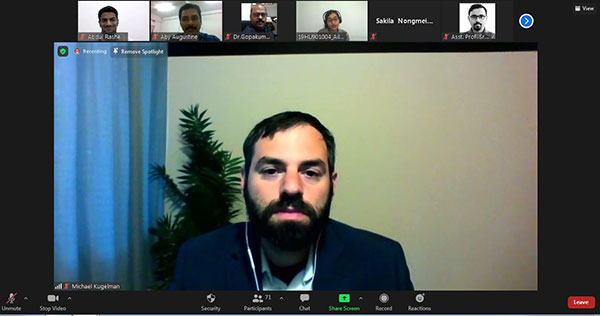 
As part of the International lecture series organized by the postgraduate department of Journalism and Mass Communication Prof. Chike Frankie Edozien, addressed the students on January 16, 2019. He is a Journalist and Writer and currently serving as a faculty member of New York University. He is also known to be the first Nigerian to have written a non-fiction book on homosexuality, The Lives of Men, in 2018. He addressed the students on international reporting, focussing more on how developing nations of Asia and Africa are covered in global media. He explained that in the age of technology, the idea of what is local has changed and that it is now local is international. People from all over the world share similar experiences which enable them to connect over the internet.

He defined how the traditional western media look at developing nations and listed five criteria with regard to developing countries that make news – Death, Diseases, Disaster, Despair, and Corruption. He explained that this one-sided portrayal and whitewashing news, is leading to widespread misrepresentation and misconceptions about the countries. This has led to misleading ideas about the countries of Africa and the continent itself.

He elucidated on the need to change this and put the prerogative on the budding journalists to change this perception. This he believes can be done by laying down the importance of story-telling and changing the narrative of the developing nations. It is imperative to create one’s own narratives as journalists, so as to give a clear and truthful picture. He values above all, honest journalism, having compassion, giving the context and historical importance of matters of concern, looking into the nuances, the finer details which will make one’s work stand out and avoiding generalizations that lead to stereotypes.