National Media Conference on Newsroom Inclusiveness and Multicultural Narratives
The Department Of Journalism and Mass Communication organized the fourth edition of the national conference on the topic Newsroom Inclusiveness and Multicultural Narratives on 27 & 28 February, 2020. The inaugural ceremony began with an invocation song by the college choir. Dr Gopakumar A V, Dean and Faculty of Humanities welcomed the dignitaries and delegates to the ceremony. It was followed by the lighting of the lamp. Prof. Abhilasha R, Conference Convener and Faculty, Department Of Journalism and Mass Communication presented the prelude to the conference. She presented the current scenario in Indian Media with representation of different gender as well as inclusion of various community in the news dissemination process. She laid the track for the discussion on the importance of inclusiveness in news decision making process as well as narrative to bring out objective news.

Rev. Fr. Sebastian Elanjikkal, Provincial, St Joseph’s Province delivered the presidential address. He said media is the guardian angels of the society in the right sense, and it has to be more sensitive to the people marginalized.

The inaugural address was delivered by the chief guest Shri. Shubranshu Chowdhary, Founder CGNet Swara and Former BBC Journalist. He spoke his experience as a war journalist in BBC and how news narratives is different at international level and local level. Shri. Shubranshu Chowdhary spoke about how “audio” can be answer to our problems in connecting to the masses in the media dark regions of our country. He went on to draw references from his professional life when he came face to face with harsh reality of his state; Chattisgarh. How the problems of tribal population never makes it to the main stream media.

The vote of thanks was proposed by Prof Anju Michael, Conference Convener and Faculty, Department of Journalism and Mass Communication. The inaugural ceremony has culminated with the Jayantian anthem.

The conference further had elaborative and profound talks given by the technical session speakers. The first session was on Multicultural Reporting by Ms Asma, Media Critic & Independent Journalist. She spoke about gender and caste inclusion in newsroom. She challenged the audience to question the concept of objectivity in news and asked if objectivity could be obtained in presenting just two sides of the stories. Ms Asma explained the inference of multinational companies and political parties in news making process. She encouraged students to make use of internet news platform to for independent reporting.

It was followed by session on Transgender Representation in Media by Ms Heidi Saadiya, Reporter, Kairali Channel. She spoke about the social stigma against the trans-community even after the legalization of section 377. Ms Heidi had shared her story of transformation from a male to female and her struggle to educate herself which empowered her. “Transgender community lacks voice in mainstream media. Society looks at them as beggars or sex workers. There is very little effort to understand the basic needs of the community,” she said. Heidi shared hos she has to fight the stigma as a transwoman in media.

The second day session began with Media Inclusiveness – Gender Perspective by Ms Gita Aravamudan, author, journalist and novelist. She talked about the transition in the newsroom and increasing presence of working women journalists, which has provided a platform for their voices to be heard. She said, “There is a positive change in media. Even though it is slow, media is giving more space to women and minorities.” Ms Gita also had an interactive discussion with the audience on female gaze and objectification of sex in advertisements.

It was followed by a session on Everyday lives Everyday problems: Reporting the marginalized. The resource person for the session was Ms Vishaka George, PARI. She shared various stories that People Achieve of Rural India is doing and how it impacts the life of many. She explained the complexity of reporting news about rural India. Ms Vishaka shared information on how students and professionals can associate themselves to independent organizations such as PARI.

The third session was on Culture and Inclusiveness in Design and Advertising by Mr. Fazil M, Creative Head, RR Donnelley. He spoke about how one needs to think out of the box to be creative in order to survive in the ever changing field of creative media. He went on to elaborate on the fact that advertisers do strive hard to be inclusive, not only in terms of race, religion or caste but also in terms of ideas.

Post lunch programme began with the paper presentations. The conference has around seven papers from delegates around the country. Dr Bhargavi D Hemmige, Professor, Department of Media Studies, Jain University, Bengaluru was the moderator for the session. The paper had diverse topics ranging Kannada media, portrayal of homosexuality in advertisements, gender roles in cinema, dalit representation in Indian cinema and so on.

The last session of the two day conference was by D V Rajashekar, Former Editorial Advisor, The State. The session titled Madhyama Bahutva focused on the pluralism in Kannada media. Mr. D V Rajashekar spoke about how difficult it was for people from minority communities to gain entry to the field of media and the scenario has changed for the better as society has started being more inclusive. He also spoke about the importance of bringing issues related to minorities to mainstream media and how crucial it is for the development of the society. 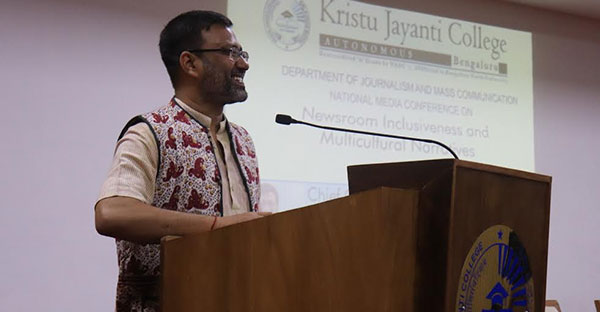 Two- day National Media Conference on Gender Identity and Changing News Paradigms
Department of Journalism and Mass Communication organized the third edition of the national media conference on ‘Gender Identity and Changing News Paradigms’ on February 19 & 20, 2019. The event was inaugurated by Ms Ammu Joseph an independent journalist and author. While addressing the gathering she said, “In order to enjoy freedom of expression, rights and gender equality; include men, women and members of sexual minorities to participate in multiple roles at multiple levels in the media. Let them to express themselves through the media and to determine the nature and content of media.” She also siad that gender balance is an obvious pre requisite for any pluralistic media that reflects the diversity of any given population

Rev. Fr. Josekutty P D, Principal delivered the presidential address. He addressed the role of media in the representation of women in mass media and gender identity scenario in the world. He said: “We are aware that change in media landscape is constant. We live amidst latest changes in the history of media. The nature and magnitude of this change are so enormous that most media executives and media scholars fail to recognize it.” He added on to say that that technology and its current applications have evolved at lightning speed transforming the media landscape.

National conference on Contemporary Discourses: Media, Gender and Culture
Department of Journalism and Mass communication organized a one day national conference on Contemporary Discourses: Media, Gender and Culture was organized by the Department of Journalism and Mass Communication on February 16, 2018. Miss Dhanya Rajendra, Managing Editor of The News Minute was the Chief Guest. She spoke about the changing role of women in media. “Although there is an increase in the number of women journalists, what we need are more women in decisive roles within media organizations. Journalists should be hired on the basis of the skill in gathering and reporting the truth rather than because of their gender”, said Miss Rajendra.Dr. Akkai Padmashali, Guest of Honour, leading Transgender Social Activist and Founder, Ondende opened up a broader outlook towards the field of Journalism and said, “Journalism is not just about the stories you cover, it is about the issues that you stand for and its overall impact. The time has come to speak the Journalism and Politics of love, acceptance and development”. The conference further had elaborative and profound talks given by the technical session speakers.

Applications for Karnataka State Minority Scholarships for the academic year 2020 - 21 is open. [CLICK HERE FOR MORE DETIALS] | 56th Annual Convocation of Bangalore University [CLICK HERE FOR DETAILS] | Download the ( Kristu Jayanti + ) App for easy access and to keep yourselves updated with the latest news & activities on the campus. Download from Google Play store (android devices) and app store (Apple devices).|