Field visit to Gandhi Bhavan
Re-living the Gandhian philosophy
“The purpose of life is to live it, to taste experience to the utmost, to reach out eagerly and without fear for newer and richer experience.” - Eleanor Roosevelt

Proving once again that the success of education lies in giving the students chances to connect classroom lessons to real life experiences and tangible artifacts, the Department of Political Science of Kristu Jayanti College headed by Prof. S J Michael organised a one-day study trip on 31 January 2020, Friday, for the students of 2nd and 4th semester BA JpsEng to Gandhian Centre of Studies and Janapada Loka, Bengaluru. Around 85 students participated in the study tour which rendered a great learning experience.

The students under the leadership of Dr Sneha D R, Political Science club co- ordinater and Dr. Kaveri swami, gathered in the campus at 8.30. The journey began at by 8.45 am and reached the first destination by 10.00 am. The enthusiastic students interacted with the Director of the Gandhian Study Centre. Centre for Gandhian Studies at Bangalore University offers different programmes on Gandhism and its contemporary relevance. It aims to network with likeminded organizations in propagating Gandhian values.

A short interactive lecture and learning session was arranged under the title “Relevance of Gandhi in 21ar century”. By Dr. Nataraj Huliyar, Director of the Centre of Gandhian Studies. Many students presented their views on Mahatma Gandhi, the great epitome of Satya and Ahimsa and Gandhian Era. The speeches and presentations brimmed with Gandhian ideologies, thoughts and principles and took the listeners through a journey covering the pre and post-independence and the most relevant Gandhian Era.

Dr. Nataraj Huliyar proposed the presidential address reflecting on his own experience of studying and sharing the principles of Gandhism. . The student speakers were awarded with the certificates of appreciation.

The next destination was Janapada Loka, another milestone of Indian Political History. Janapada Loka, a culmination of Indian culture and art is a folk museum that has an exclusive display of the village folk arts of Karnataka situated in Ramanagara. It helped the students to unearth the unknown historical and political facts of Indian history in general and Karnataka history in particular through the visits to the various wings of Janapada Loka such as Lokamatha Mandira, Loka Mahal, and Chitra Kuteera.

The molding of best students does not only take place within the four walls of the classroom. The second and fourth semester BA students accessed history through this study tour. It was a chance to relive the history, understand the culture and art; the physical, sensory and social aspects of the trip have enriched the learning process immensely.

FIELD TRIP
Date: 25.09.19
Number of beneficiaries: 42
Name and details of the Resource Person: Mr. Manjunath, Mr. Doddayallappa and Mrs. Shobha Panchayat Members and Mr. Manjunath Ex Panchayat Member
Objective: To give students a clear picture of the rural side, their development initiatives and steps and problems involved in implementation from officials

The department of political science arranged a field visit to Sriramanhalli village on September 25th 2019 for the students of final year BA (JPsEng). The journey kicked off at 9:00 AM from the college premises. The journey lasted around an hour as the village is located at the outskirts of Bangalore. The programme consisted of talks by members of the village Panchayat, an interactive session with the students and a walk through various departments run by the Panchayat like the school, stitching center, canteen and catering services and organic farming land which is aided by the Panchayat.

The Programme Director, Mr. Ramaswamy started with the history of Panchayat in earlier days when the members of Panchayat were selected on hereditary basis wherein only the members of the same family could become heads of the Panchayat. The session was then taken over by Mr. Manjunath, Member of Panchayat and chairman of Raita Seva Sahakara Sanga, Rajanguntte who gave more insights into the administrative part of it. He said that all the programmes initiated by state and the center are to be implemented of which the whole responsibility lies on the Panchayat which is a huge challenge.

Feedback:
1. Students were very happy to have practical exposure about Panchayat.
2. Students are looking forward for many such knowledgeable enriching trips.
3. Students were filled with thrill and joy to visit a role model village to entire India.

LEARNING OUTCOMES:
Provides opportunity to have practical exposure to the working of parliamentary system in Indian.
Provides first-hand knowledge about the signifance of the Political Executives.
Obtain practical and real life knowledge on various aspects of Political institutions.

The department of Political science organised an Educational tour to New Delhi from 21st July 2019 to 28th July 2019 along with a selected students of V SEM BA HEP/JPsENG to visit parliament museum, Rastrapathi Bhavan Museum and to attend parliamentary session. The students along with the teachers reached the capital city on 23rd of July first visited the Indian Parliament House; the supreme legislative bode of the Republic of India. The group attended the Loksabha session of the day from 2.45 pm to 3.45 pm. The visit provided golden opportunity for the students and it helped them to acquire a first hand and direct knowledge about the working of the Indian parliamentary system.

The second day of the tour witnessed visits to Qutub Minar, Red Fort and Lotus Temple and Akshardham. An average of an hour was spending in these historical monuments. The visit to Swami Narayan Akshardham Mandir, vibrant with its spiritual cultural campus and architecture on the same day brought a culmination of the enriching day.

On the third day the batch visited the Rashtrapati Bhavan, the esteemed residence of the President of India located at the Western end of Rajpath in New Delhi. The group under the directions of the guide gained bunch of information about the various aspects of the English architecture pioneered by Sir Edwin Lutyens. The great dome of the Central Government Office, Ashokan Hall, Durbar Hall, Mughal Gardens, Morning Room, Yellow Drawing Room, South Drawing Room, President’s study room and various other attractions added glory to the intellect and aesthetics. The Rashtrapati Museum, the only underground museum welcomed the group with artefacts of the single marble stone statues of King George and Queen Mary, the finest gifts received by various Presidents of India including the gold Chonma Chong crown presented to President A P J Abdul Kalam by His Excellency Roh Moo-Hyuh, President of Korean Republic, signed photographs of Queen Elizabeth and original drawings of the structure by Sir Edwin Lutyens.

On the whole Educational tour was fruitful for the students of Political science.

The Department of Political Science of Kristu Jayanti College took the students under the guidance of Political Science Department Coordinator Dr. Kaveri Swami, to participate in the speech competition on account of 150th Birthday celebration of Mahatma Gandhi at Gandhi Bhavan, Bangalore University, over the topic of “Relevance of Mahatma Gandhi in the present day” where all our four students bagged the prizes. The organizers gave an account of Gandhi’s life and journey in their welcome speech and motivated the students and other audience to research more on his life and teachings. Many unknown facts of Mahatma Gandhi were known to students by the expert speakers. The participants spoke about various aspects of the topic and enlightened audience about Gandhi’s life and his relevance.

The Department of Political Science organized an Educational trip to Delhi to visit Parliament House accompanied by the Head of the Department Prof. S.J.Michae4l. Fifteen students were shortlisted for this trip. The trip was scheduled from 29th July to 6th August 2018. Students witnessed the Lok Sabha session, visited Parliament Museum, India Gate and the famous Aksharamdham Temple the eternal place known for its devotion, purity and peace. Our students were stunned to see Rashtrapati Bhavan and its architecture which was beyond imagination. Many unknown facts about the Qutab Minar were discovered by our students. They also had an opportunity to visit Birla Temple and Lotus Temple. 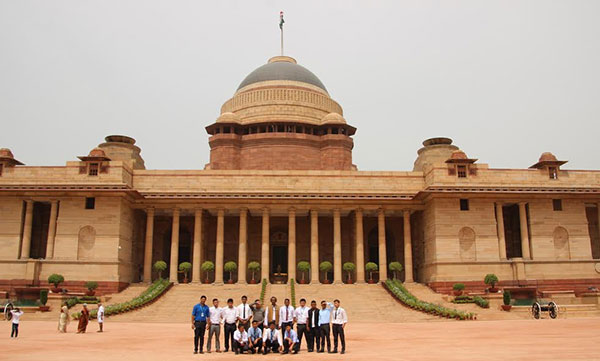 An informative documentary “RECOLLECTIONS OF SATYAGRAHI” shown to the students. Later selected students were called to talk on features of Gandhism, relevance of Gandhi. The gathering was made more entertaining by a street play on Gandhiji performed by the students of Political science department, KJC.

The students along with Prof.S.J.Michael visited Janapadaloka to see folk museum that has an exclusive display of the village folk arts of Karnataka. Students visited Folk arts museum, Loka Mahal, Chitra Kuteera, Doddamane, Shilamala, Arghyamala etc. to enrich their knowledge about local administration.