A step towards a better tomorrow… National voter’s day….

National Voters' Day, In order to encourage more young voters to take part in the political process, Government of India has decided to celebrate January 25 every year as "National Voters' Day". It has been started from January 26, 2011 to mark Commission's foundation day.

The department of Political Science created and offered an awareness programme on account of National Voters Day on January 25, 2020. The program was staged by the Political Science Department in Mini Auditorium 1. It was inaugurated by Rev.Fr.Josekutty P.D., Principal, Kristu Jayanti College in the presence of Prof.S.J.Michael, HOD Department Of Political Science, Prof. Sneha D.R. faculty coordinator, Prof. Kaveri Swami and Prof.Shariff.

The event included a poster exhibition depicting ways to vote and stressed on the importance of voting with students giving live explanation of the posters. Various other programs like mime, dance and a mini skit were staged to emphasize the importance of voting. All the programs that were staged were woven around the idea that the proportion of vote by youth can create a huge difference in society. The youth of today must be responsible citizens and must actively involve themselves in the process of voting as the votes cast today can only save tomorrow. For a better future of the country and for a better place to live in, youth must start being responsible citizens of the country and voting is the first step towards it. The event was a reality check for young citizens as rightly put by Roald Dahl," Somewhere inside of all of us is the power to change the world."

In the year 1950, on the 25 January, The Election Commission of India was established. This came into practice on the 61st foundation day of election commission. This year’s theme of national voter’s day is Electoral Literacy for Stronger Democracy. National voter’s day 2020 marks an important milestone in the history of Indian Democracy as the election completes 20 years of its existence, Said ECI in a press release. Voter’s day is celebrated to make the citizens aware of the importance of voting. The system of universal adult franchise is practiced in India since the time of independence, India opted for democratic Govt. Since the time of independence and the inclusion of UAF has propagated inclusive nature that stands for without any discrimination on the basis of caste, religion, race, status and gender. All the citizens (Anyone above the age of 18 years beholding Indian Citizenship) of the nation are given a chance to vote. National voter’s day’s foundation is based on the aim of making youth aware of voting. Voting is extremely important to decide who we entrust our faith on, to frame laws and make the society more inclusive and habitual for the citizen’s subjects and tourists.

Every vote counts… do vote…

Voter’s Day
The Political Science students of Kristu Jayanthi college in collaboration with National Service Scheme (NSS) and BBMP have stepped forward to spread the word about the importance of voting and the right to vote among the youngsters. The programme extended for whole day comprising of various events such as promotion, mime, poster exhibition and rally. The idea of voter’s day began in 2011 and was executed to promote awareness of voting among citizens.

The programme commenced with a promotion in the college quadrangle which had a participation of about 200 plus students wore tri-coloured caps, holding the placards, Indian flag and boards. The students were arranged to form an Indian map and message to promote the feeling of patriotism among the onlookers.

A short mime was performed by IV SEM HEP followed by pledge lead by the Dean of Humanities Dr. Gopakumar A.V. The programme was inaugurated by Fr. Joskutty P.D, Principal and Fr. Augustine George, Vice Principal. Immediately after the promotion, Chief Guest of the day Smt. Jyothi Lakshmi, ARO BBMP issued one voter id card to one of the student.

A poster exhibition was inaugurated by Chief Guest of the day Smt. Jyothi Lakshmi, ARO, along with Fr. Joskutty P.D, Principal, Fr. Augustine George, Vice Principal and Dean of Humanities Dr. Gopakumar A.V. The exhibition was displayed by the Political Science students under the supervision of Department coordinator. The posters exhibited the importance of voting, fact on voting, rights and responsibilities and also provided space for each one to voice individual opinions on voting as well as to give feedback. The Chief Guest added “It gives me immense pleasure to see students put so much efforts, the promotion also was an amazing experience to witness.”

The department of Political Science in collaboration with the NSS, NCC, headed by faculty coordinators and students of the respective department conducted rally around Kothanur along with BBMP members. The rally was intended to spread awareness on the importance of voting right. Students displayed placards highlighting the need for exercising voting right to fulfil the democratic responsibility and elect honest persons with integrity. The rally began around 2.30pm from the College and covered the areas of Kothanur and Gedalhalli. Students marched along with chants and posters showcasing and promoting voting. “This was major step taken by our department to promote voter’s day and to spread awareness.” 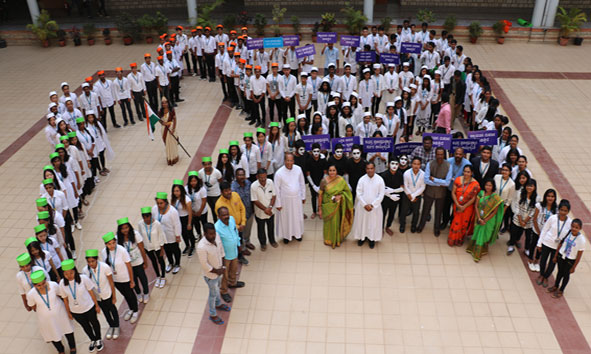 The event began with a mime by the students from Gandhian Studies presenting an insight of persisting issues of poverty and non-violence. An extempore was conducted by the students of Political Science department over the topic "Relevance of Mahatma Gandhi in the current age". Each participant expressed personal opinions and concerns on the provided topic which was judged by Prof. Vijayakumar and Prof. Ramya.

The Skit was performed by the IV Sem HEP students showing a small snippet (video screening) of Gandhi's life during the separation of India and Pakistan. A short film was then screened by VI Sem HEP students.

The event came to an end note with a small speech by the guests present. Prof. Ramya expressed how "Remembering Gandhi today was a very special thing". She thanked the department for putting forth such an event.

Prof. Vijayakumar also expressed appreciation towards the department for conducting the program. "What is that you've learnt from Gandhi?" He asked, putting the students to thought. He talked about the relevance of Gandhi and his ideologies which he termed as immortal. He brought his speech to an end with the message "Truth is God" he encouraged the students to follow the principle of truth.

The programme was concluded with vote of thank by the Department Coordinator – Dr. Kaveri Swami and said "Gandhi is present in each one of us; only thing is we need to realize." 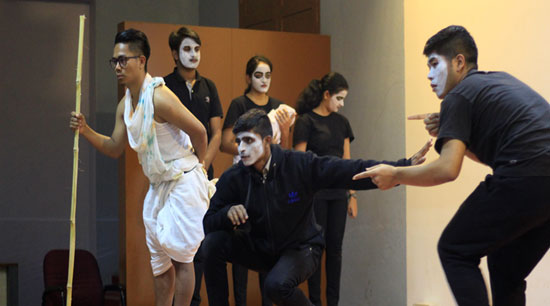 SWACHH BHARAT:
The department of political science organized a swatch bharat programme to imbibe the principles of Gandhi on 4.3.16. Certain volunteers from the department of political science participated in clean campus drive. Rev.Fr.Principal inspired the students with his motivational talk and stressed the importance of keeping things clean. Students understood the importance of saying- cleanliness is next to godliness and actively participated in the event.