"Debating the Past for the Future" - A workshop on the Art of Debating
“The Department of History organized a Workshop titled “Debating the Past for the Future” on the Art of Debating on 07/12/19. Mr Aaron Mirza, an advocate by profession and a national level debating champion was invited to train the students to enhance their debating skills and to introduce them to the importance of public speaking with a strong hold of history which will allow the speaker to have a strengthen base of his or her argument in augmenting a positive future. The speaker also strongly advised the students to involve themselves in various activities like intercollegiate debates and MUN, this, he emphasized, will expose the students to the different ideologies, opinions and understanding of individuals which will eventually allow them to be informed speakers.

During the session, the students were divided into groups and were given a platform to reinvent historical ideas and re-establish the relevance of these ideas. They were provided with worksheets to work on their usage of language in advancing their ideas in a debate or a public speaking forum. The groups were then exposed to glimpse of MUN, where the groups were given countries and various agendas like the plight of refugees, terrorism, rape, drug abuse and climate change keeping in mind the debate to be done on a historical basis.”

"Situating the Relevance of Manuscripts in History Writing"
“The Department of History in association with the National Institute of Prakrit Studies, Sravanabelagola organized a workshop titled “Situating the Relevance of Manuscripts in History Writing” on 06/12/19 for the IV and VI BA HEP students. The workshop started with an introduction to Manuscript writing and the formation of these manuscripts before the writings were inscribed. The students received first hand information and a demonstrative explanation as to how these manuscripts are made ready for inscribing the information. They were also explained of the various tools used in inscribing. The students were then informed about the importance of preserving manuscripts and their relevance in decoding ancient cultures and heritage. The students were also encouraged to find a passion in manuscripts as their profession for it is extremely valuable and a noble work. The students got an opportunity to interact with faculties and researchers of the institute.” 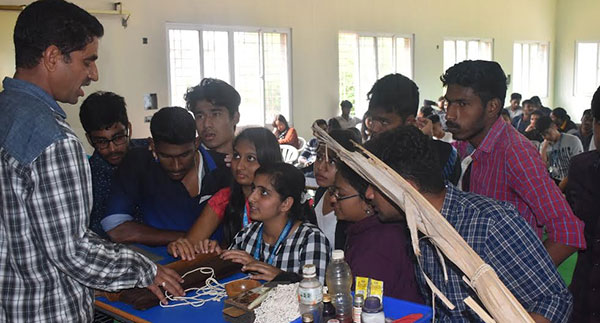 Session I: Theorizing on the concepts of Language and Scripts.

The resource person started the workshop with a theorizing session on the basics of Language and Scripts. The students were made aware of the fundamental features and characteristics of languages and scripts and thus they were able to differentiate between the two. Mr. Jantakal also pointed out the examples of ancient Indian languages such as Pralrit, Pali and Sanskrit and Indian scripts such as Indus, Brahmi, Kharosthi and Greek.

The evolution of writing systems from pictures, pictograms, ideograms and phonograms were also explained. Mr. Jantakal thereafter proceeded to discuss the evolution of the Ashokan Brahmi Script.

Session II: Technical Session
Students in this session were taught to identify the basic and elementary Ashokan Brahmi alphabets. They were also made to identify and transliterate simple words written in the Brahmi script.

Outcome:
1) Students were taught the significance of the Ashokan Brahmi Script for reconstructing ancient Indian history
2) Awareness and understanding the difference between scripts and languages.
3) Awareness about various concepts such as Phonograms, Pictograms, Ideograms etc
4) Reading and Writing basic words in the Ashokan Brahmi script.

Workshop on “Preservation of Palm leaf Manuscripts
Date: January 18th 2017
Time: 1.45 -3.00 P.M
Classes Attended: I, III, V Sem B.A HEP/ HTJ students
Number of beneficiaries: 112
Resource Persons:
1. Mr. Hazari Parsvanath, Assistant Director of Manuscript Dept., National institute of Prakrit Studies & Research, Shravanabelagola
2. Dr. Sreedhar, Head, Department of Hindi, Kristu Jayanti College, Bengaluru
Objective: To provide hands on experience in the use and handling of manuscripts.
As part of youth week celebrations 2017, NSS unit of the college in collaboration with the Dept. of History organized a workshop on “Preservation of Palm leaf Manuscripts”. It is one of the oldest medium of writing in India especially in Southern India. Indian Manuscripts are the richest collection of written documents, texts and scripts. These written documents provide information on the existence of different civilisations and emphasise the importance of their survival. The manuscripts are vital Sources of History of India. A manuscript is a handwritten composition on paper, bark, cloth, metal, palm leaf or any other material. They reflect the magnificence of the Indian civilisation including languages, philosophy, art and architecture. The Workshop focused on providing information about preparation, use and preservation Palm leaf manuscripts. Steps regarding preparation of Palm leaves, boiling the leaves, drying and polishing for writing or painting were explained. Preservation techniques adopted by the Project specialists to preserve original manuscripts were demonstrated. Normally treatments are given using fumigation chambers to protect palm-leaves from white ants, fungus and other insects by using Thymol and chloromate solution. Students were provided hands in training on the preservation techniques
Feedback:
• Very productive session – respect the heritage of manuscript culture in India
• Interesting to see and hold manuscripts
• Interesting and Informative 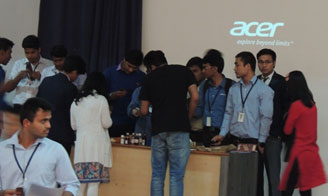 Mr. Gautam Jantakal, made an enlightening presentation on the background and history of Numismatics. Numismatics is the study or collection of currency, including coins, tokens, paper money, and related objects The session was highly informative. The session provided an outline of early Janapada coins, Punch marked coins, and developments in coinage during medieval and modern India. Rare coins collected by the resource person were circulated and it showcased the rich and diverse cultural heritage of Indian coins. 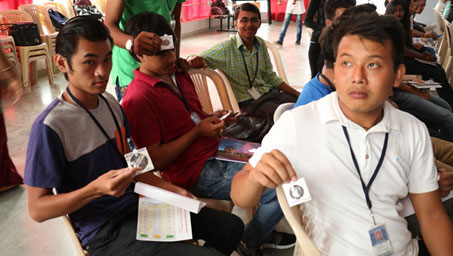 Workshop on Introduction to Indian Archaeology
Theme: Ancient Indian Literature and Epigraphy
Date: 2/12/15 | Venue: Mini Audi I
Number of Participants: 30 BA HEP/HTJ students
Aim: To help participants understand the vast plethora of data available in India’s Past, and guide them through scientific methodology to collect and interpret data in a manner that enhances their experience of Indian Past.
Session time: 6 hrs
In this workshop, we will explore the role of oral History, and learn how to derive information from written sources of Ancient India. Eligibility: participants must be generally familiar with stories of Ramayana & Mahabharata, life of Buddha & Ashoka.

Session- I (9:30 – 1pm )
Introduction to Brahmi script
The Brahmi script is one of the most important writing systems in the world by virtue of its time depth and influence. It represents the earliest post-Indus corpus of texts, and some of the earliest historical inscriptions found in India. Most importantly, it is the ancestor to hundreds of scripts found in South, Southeast, and East Asia.

Brahmi is a "syllabic alphabet", meaning that each sign can be either a simple consonant or a syllable with the consonant and the inherent vowel /a/. Other syllabic alphabets outside of South Asia include Old Persian and Meroïtic. However, unlike these two systems, Brahmi (and all subsequent Brahmi-derived scripts) indicates the same consonant with a different vowel by drawing extra strokes, called matras, attached to the character. Ligatures are used to indicate consonant clusters.

In this session the students were taught to read & write Brahmi script. It began with the study of consonant and later vowels. The experience of writing their own names and family titles encouraged participants to willingly study brahmi script. The participants were very enthusiastic and had an interactive session.

And an example of strokes added to indicate different vowels following the consonants /k/ and /l/.
The exercise of deciphering the rock edict of Asoka was very fascinating and unbelievable experience.
Session-II & III (1:45pm-4:45pm)
Learning History from Jataka Tales
The Jātaka refer to a voluminous body of literature native to India concerning the previous births of the Buddha. These are the stories that tell about the previous lives of the Buddha, in both human and animal form. The future Buddha may appear in them as a king, an outcast, a god, an elephant—but, in whatever form, he exhibits some virtue that the tale thereby inculcates.

This idea of importance of thought is one of the foundations of Buddhism. With this, the idea of passing on knowledge and increasing one’s wisdom is of utmost importance. In order to make sure this move toward enlightenment is attained, a part of the Buddhist tradition is the telling of stories that stress moral themes. One major group of these stories is known as the Jataka Tales. Originating in India, these stories are about the reincarnation of Buddha, a spiritual teacher and founder of Buddhism. Jataka tales were originally recorded in literary form, but interpretations have been performed in dance, theatre, and formal recitation. The reincarnation of Buddha, often into animal form, is one of the main themes of many of the stories. All of the stories contain a moral lesson that teaches the wisdom of Buddhism.

This session was the most interactive session on how to decipher history from Jataka tales in the beginning , it began with listening to stories and discussion on what is to be given importance while deciphering history from these stories like the materials, social systems, law, position of people, guru-shisyaparampara etc. and the participants also witnessed charts and stories of crow that drank water from pot which indicate the period/time.

Session III included a role play on the various historical narrations given in the Jataka tales .The stories enacted helped to understand the topic more effectively.

Participants feedback summary
• This workshop was interesting, & really helpful .It directed us to a new path of interest, hope, importance towards the subject
• The session was interesting and informative, went without any room of monotony
• It was a productive session as we experienced a new topic in history and we hope the Dept. of history and College to conduct many more workshops in the days to come as it would result in development of knowledge and better understanding of subject to gain wisdom
• The exercise of deciphering the rock edict of Asoka was very fascinating and unbelievable experience.
• Grateful to Principal and Financial administrator for funding for the workshop. 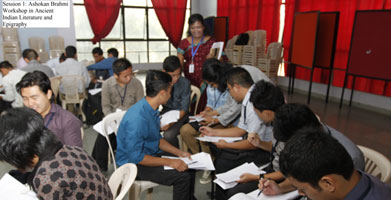