"History on Wheels: Sravanabelagola"
“The Department of History organized a one day trip to Sravanabelagola and the National Institute of Prakrit Studies on 06/12/19 for the IV and VI BA HEP students. The journey started at 6 am from the college campus. The first stop was the Chandragiri and Vindyagiri Hills in Sravanabelagola. Students explored the Chandragiri hills first were they came across number of inscriptions carved on the stone surface of the hills. The accompanying teachers highlighted the architectural genius of the 58 feet high monolithic Gomateshwara statue and narrated the history behind it. The students then proceeded to the Vidhyagiri Hills and very excited to see what they had learnt in their Karnataka history paper coming alive. The historical narratives of the various basadis located on this hill were explained to them. They were also informed about the inscriptions present there.

The group then headed to the National Institute of Prakrit Studies, where they had a workshop on the significance of manuscripts as a source to understanding history. The students got an opportunity to interact with faculties and researchers of the institute.”

"History on Wheels: Devanahalli Fort"
“The Department of History organized a one day trip on 04/12/19 for the II BA HEP students to the above mentioned places on 04/12/19. The journey started from the college campus at 9 am and the first stop was the Devanahalli Fort. The students were explained the historical significance of the fort and the fact that it is one of the rarest living forts in India was also highlighted. The walk through the fort complex introduced the students to the military driven arrangement of the fort by pointing to the various elements present such as the battlement. The walk also led the students to explore the Venugopalaswamy temple complex inside the fort. Students were able to identify that this temple was one of the oldest among the temples present inside the fort complex. It was explained to them that the courtyard, with a Garuda Stamba, was one of the most spacious one and that the walls of the temple depict various scenes from Ramayana and the feats of Lord Krishna as a child, and that the pillars have beautiful statues carved on them.

The journey continued and made a halt at the Bhoga Nandeeshwara temple. The original temple in the complex was told to the students that it was one of the oldest temples of Karnataka and that it dated back to the early 9th century. The students were thrilled to learn from the Archaeological Survey of India’s tablet that the construction of the temple for Shiva is credited to the Nolamba dynasty ruler Nolambadiraja and the Rashtrakuta emperor Govinda III.

The group then proceeded to the Bharat Ratna Sir M Visvesvaraya Musuem located at Muddenahalli. The students spent time in the museum being inspired by the life and works of one of the greatest Gems of Karnataka, which the Department had already introduced to them earlier this year in a series of lecture.

Before returning to college the group made a final stop at the Shri Shri Nakoda Avanti Jain Temple located near the Devanahalli Fort to know the contribution of Jainism to the state of Karnataka.”

The journey started from the college premises at 5 am with 50 students and 2 faculty members. The first stop was Srirangapatnam. Entering the fort complex of Srirangapatnam, the students were introduced to the concept of double fortification and double moat. At Srirangapatnam, the first site was the Sri Ranganatha Swamy Temple. Students were educated on the various categories of architecture (Hoysala, Vijaynagar, Mysore, Woodiya, Haider Ali etc) involved in the temple complex. The group then proceeded to the Daria Daulat Place and gardens of Tipu Sultan. Information regarding the various events of Tipu Sultan was received from the myriad of wall painting and other artefacts in the palace. The journey continued to Mysore and the first stop there was the Mysore Palace. Availing student discount for the students and the faculties, the students were led in the passage to appreciate the extravagant architecture of the palace which is a combination of Hindustani, Islamic and European styles. The group then proceed to Chamundi Hills and view the magnanimous monolithic Nandi structure. The last pit stop for the trip was the KRS Dam and the Brindavan garden.

Learning Outcome:
• Able to understand the historical significance of Mysore and Srirangapatnam
• To view and analyse various architectural styles developed under various dynasties. 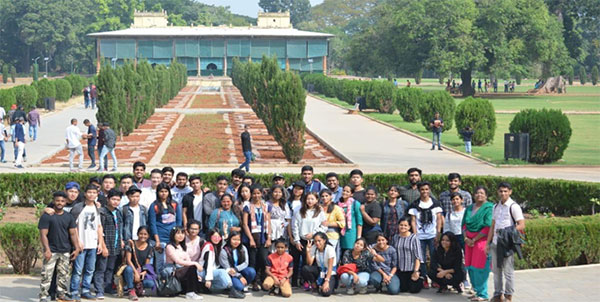 The Study trip to Hampi commenced on Jan 6th at 9.30 P.M in the college bus with 25 students from IV sem B.A HEP/ HTJ batches in the Kristu Jayanti College Bus. The bus reached the heritage hotel Malligai at Hospet at 5.00 A.M. on Jan 7th After a complimentary breakfast at 7.30, journey to Hampi destinations started.

The well experienced tour guide explained the significance of Hampi as a renowned UNESCO World Heritage Site. The village stands within the ruins of the city of Vijayanagara, the former capital of the Vijayanagara Empire. The prominent places of Hampi such as Virupaksha Temple, Vittala Temple and Hampi Bazaar were visited.The first day ended with the relaxing visit at Tungabhadra Dam, gardens and musical fountain

On the second day we visited Aihole – ancient historic site with numerous Buddhist, Hindu and Jain monuments dated from the fourth century through the twelfth century A.D. Main attraction was the Durga temple and Lad Khan temple. Another UNESCO Heritage site Pattadakal, is a complex of 7th and 8th century A.D was indeed art in its truest form expressing the ingenuity and wealth of tradition of India. Three types of Architecture – Nagara, Vesara and Dravida forms can be clearly seen in the temple complex which includes, the Mallikarjuna Temple, Virupaksha temple and Papanatha Temple.

After a refreshing lunch, we visited Badami or otherwise known as Vatapi. It is famous for its Cave temple- Four caves- dedicated to Vishnu, Siva, Jaina. We also had the opportunity to go to the Badami village Fair.

The main attraction in Belur is the Chennakeshava temple complex which contains the Chennakesava Temple (dedicated to Chennakeshava, meaning handsome Vishnu) as the centre piece, surrounded by the Kappe Chennigraya temple built by Shantaladevi, queen of king Vishnuvardhana. The KSTDC guide explained to the students the various features of the temple. The first moulding were the temple wall meets the jagati (platform) around the temple is made up entirely of a frieze of elephants. There are two more shrines here that are still in use by devotees and there is a Pushkarni or stepped well to the right side of the main entrance. The Dravida style rayagopuram at the entrance which was a later addition by the Vijayanagar kings, who considered this deity as one of their Kuladevata or family god. The temple is one of the finest examples of Hoysala architecture. It was built by king Vishnuvardhana in commemoration of his victory over the Cholas at Talakad in 1117 CE. Legend has it that it took 103 years to complete and Vishnuvardhana's grandson Veera Ballala II completed the task. The facade of the temple is filled with intricate sculptures and friezes with no portion left blank. The intricate workmanship includes elephants, lions, horses, episodes from the Indian mythological epics, and sensuous dancers (Shilabalikas). Inside the temple are a number of ornate pillars. Darpana Sundari (Lady with the mirror) carved on walls of Belur Temple is one of major attractions in the complex. The credit of carving most of the sculptures goes to Jakanachari.

Halebidu (which was previously called Dorasamudra or Dwarasamudra) was the regal capital of the Hoysala Empire in the 12th century. It is home to one of the best examples of Hoysala architecture in the ornate Hoysaleswara and Kedareswara temples. This name is given because this city was ruined two times by Bahmani Sultanate. he temple complex comprises two Hindu temples, the Hoysaleshawara and Kedareshwara temples and two Jain basadi. In front of these temples there is a big lake. The two Nandi statues which are on the side of the Hoysaleshwara temple are monolithic. Soap stone or Chloritic Schist was used for the construction of these temples. However a number of sculptures in the temple are destroyed by invaders. So the temple is incomplete. Halebid means old abode. There is an archeological museum in the temple complex. The Hoysaleswara temple, dating back to the 1121 C.E., is astounding for its wealth of sculptural details. The walls of the temple are covered with an endless variety of depictions from Hindu mythology, animals, birds and Shilabalikas or dancing figures. Yet no two sculptures of the temple are the same. This temple is now being proposed as UNESCO World Heritage Site.

The climb to see the statue of Gommateshvara Bahubali at Śravaṇa Beḷgoḷa made the trip adventurous and more interesting. It is one of the most important pilgrimage destinations in Jainism, one that reached a peak in architectural and sculptural activity under the patronage of Western Ganga Dynasty of Talakad. Chandragupta is said to have died here in 298 BC after he became a Jain monk and assumed an ascetic life style. The 57-feet tall monolithic statue of Gommateshvara is located on Vindyagiri Hill. It is considered to be the world's largest monolithic stone statue. The base of the statue has an inscription in Kannada as well as the oldest evidence of written Marathi, i.e. devnagari script, dating from 981 AD. The inscription praises the king who funded the effort and his general, Chavundaraya, who erected the statue for his mother. More than 800 inscriptions have been found at Shravanabelagola, dating to various times from 600 to 1830 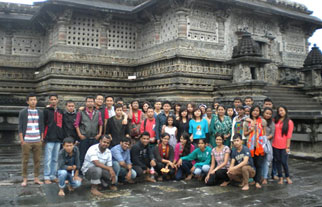