The Constitution from its Inception
"The History Square presented “The Constitution from its inception,” wherein a time line chart of the framing of the Constitution was presented, showing the history of the making of Indian Constitution. This was done in order to throw light on the essence of 71st Republic Day. It also presented the efforts taken by the great framers of our Constitution. The Unsung Framers such as Sir Bengal Narsing Rao, Mr S.N Mukharjee and Prem Behari Narain Raizada were also highlighted. Students presented the entire concept and spoke about the tireless efforts taken by the great framers, and on how today its fruits are enjoyed by all Indians. The objective of the task to pay tribute to our Constitutional framers and thus show the importance of the Republic Day was success fully achieved as it brought a feeling of pride and patriotism among the students."

"Failures that Changed History" - History Square
“The Department of History in association with the History Club on 27/11/19 made use of the History Square, in creating awareness regarding failures and how important personalities like Amitabh Bachchan, Stephen King and Albert Einstein, who had been rejected in life at many places, did not heed the negativity in being rejected but rather strived on to their goal with a positive mindset. This edition of the History Square aimed to educate the students on how failures are not a dead end in life, but rather stepping stones. In the edition, the portrayal of Colonel Sanders, the founder of KFC, who revolutionized the culinary history of the world making elite food available to the masses, is a reminder that age has nothing to do with one’s success. Walt Disney was also mentioned in the wall mainly for his many withdrawals in life. The life of Walt Disney is not the happy Disney that we witness in television today but rather a hard and struggling life, however, he never gave up and went ahead with his ideas and had become a renowned figure throughout the ages to come revolutionizing the cartoons and animated movies that teenagers and children enjoy.” 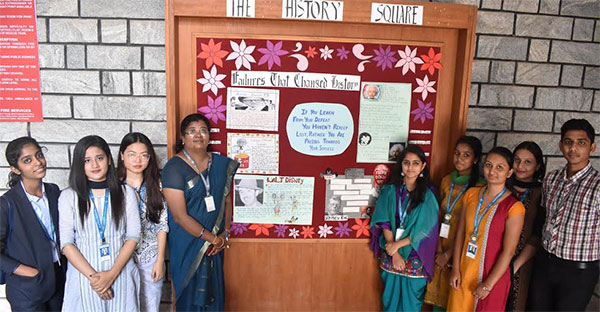 Celebrating the Unsung Sheroes
The wall magazine of the Department of History commemorated the 72nd Independence day by celebrating the lives and sacrifices of the unsung patriots and heroes of nationalist movement. The students of III sem BA and I sem BA History sketched the portraits of women leaders of freedom movement and made a presentation in the club hour. The history of these wonderful heroes [sheroes] is a wonderful testimony to the feeling of love, devotion and sense of attachment towards one's homeland. The participants proclaimed at the end ‘learning from heroes created a feeling of responsibility towards Mother India’."

Fortnight Quiz
As part of the History Square event, the History Club has been organizing a fortnight quiz. This theme adopted for this quiz is “Indian States”, where every day the Club members post two questions related to various Indian states. The quiz has been opened to all the students of the college, who can drop their answers in a box next to the Square. The answers to the questions are posted the next on the same platform. The objective of this club exercise is to promote students to express their opinion and make them aware of various important facts related to all the states of India. 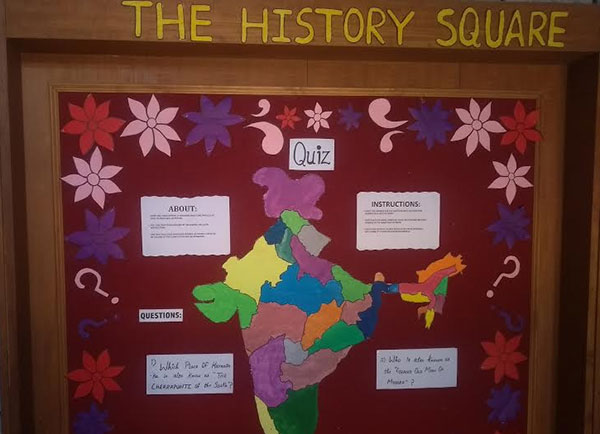