Objectivs:
1. To enlighten the community which Hindi syllabus is more important at university level in modern era.
2. To know about Hindi technical field.

The department of Hindi organised its first webinar on the concept of elaborate the Hindi technical Field and Rev Fr. Dr.Augestine George, Principal, Kristu Jayanti College provided his introductory remarks on the current scenario of Hindi Language.

Feedback:
The first webinar organised by Hindi department was interesting, many questions were raised by participants on the importance of Hindi as a language curriculum in university level and Hindi as a Language engineering course. The participants also interested to participate in future suggested to organise more webinars. 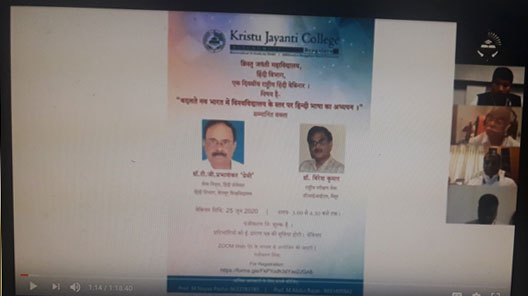 Objective:
1. To ensure that students are academically productive during the pandemic.
2. To make students aware of the potential in understanding and learning International Relations.
3. To bring together academic personalities all over the world to help enhance the level of learning.

The Department of History organized a two day webinar on “Indian Strategic Relations in Post COVID World Order”. On day one, that is 19th June 2020 the session began at 2 pm. It saw the presence of Rev Fr Josekutty P.D, Principal, Kristu Jayanti College, Dr. Gopakumar A.V, Dean, Faculty of Humanities and Prof. S.J Micheal, Coordinator, Department of Social Sciences and Languages. The session began with the welcome address presented by Prof Ramya B, Head, Department of History. The resource person of the day was Prof D. Suba Chandran who is a Professor and Dean in School of Conflict and Security studies. Head of Conflict Resolution and Peace research program and Science Diplomacy Program in National Institute of Advanced Studies (NIAS) Indian Institute of Science Campus Bangalore. The session was divided into two phases. In the first phase, the resource person primarily spoke about the changing world order. He stated that in the past, the world order was mainly altered by ‘disruption’ due to various wars and conflicts but in the present the world order has been influenced due to ‘design’. The resource person gave perfect examples for his thesis providing statistics on how China rose to power and how the various Asian countries took advantage of the maritime trade and became a global world power and as a result saw the balance of power shift in Asia's favour. On covid-19 and India's global objectives, the resource person gave a very realistic approach on how India’s options are limited and the impending threat of the neighbouring countries turning hostile. In conclusion he stated that for India to emerge as a global superpower in the post covid world order, India must focus on fixing its nations image as a secular, democratic nation. In the second phase, students and faculty members were given the opportunity to interact with the resource person through a Q & A session moderated by Prof. Ramya, Head of the Department of History, who also concluded the session by offering the Vote of Thanks.

On day two (20\6\20202), the resource person is Mr. Angshuman Choudhury who was a Senior Researcher, South east Asian Research Program in Institute of Peace and Conflict Studies, New Delhi and is also a Former GIBSA Visiting Fellow in German Institute for International and Security Affairs, Berlin. Sir was also a Founding Editor of Eleventh Column. During this session there was the presence of Rev. Dr Augustine, Vice Principal of Kristu Jayanti College. This session too was divided into two phases. In the first phase, the resource person talked about how the world order had already changed before the pandemic struck the world and emphasised more on the question of ‘what India must do?’. He gave brilliant solutions to this question like improving India’s medical diplomacy, fixing the border problem, improving its soft power, ramping up Indo-pacific relations and lastly engaging in more multilateral conferences with India’s neighbours and to prioritise the various multilateral organisations like BIMSTEC, SAARC, ASEAN, which could in turn impact India’s request for a permanent seat in the security council. Lastly, he spoke about the present China border dispute and gave very realistic perspective on the issue by starting that India must first recover socially and economically rather than going for war. He also suggested that rather than boycotting Chinese products a better alternative would be to impose restrictions on Chinese FDI. The second phase of the session gave an opportunity for students and faculty members to interact with the resource person through a Q & A platform moderated by Prof. Ramya. The session concluded with the vote of thanks delivered by Prof. Hemango. 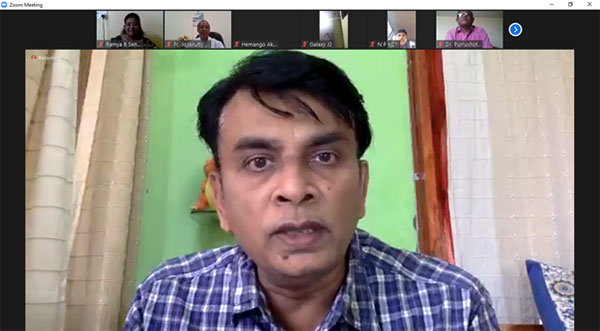 Webinar on Concept of ‘Self’ – A Historical Perspective
Date: 12/06/2020
No of Registrations: 245 | Number of beneficiaries: 119
Name and Details of Resource Person: Dr. N.A Jacob Assistant Professor, Department of English Ramjas College, University of Delhi

Objective:
1. To ensure that students are academically productive during the pandemic.
2. To enlighten students on the concept of the self and understand it better through the field of history.
3. To bring together academic personalities all over the world to help enhance the level of learning.

The department of History organised its first webinar on the concept of Self and Rev Fr. Josekutty P.D, Principal, Kristu Jayanti College provided his introductory remarks on the quest that existed from times immemorial to understand the idea of ‘self’. Prof N.A Jacob presented an ideological account, of certain texts that covers the concept of self in the wide historical period and generate interested among the listeners about the idea of self- examination.

The session started with the philosophical idea of Descartes, His texts Discourse of Method and Meditations On First Philosophy. Descartes wanted to find a one firm immovable point to build a centre of knowledge. He lead his followers to cast into a series of doubt on SENSES which is subjective and unreliable truth. According to him the only real truth is him because “ I am a thinking being”, “what I think may not be right, but it is a fact that can be proved or disproved” That itself is a proof that I EXIST. Prof Jacob provided an interesting narrative on
• Intellectual mind that is distinct from corporeal [worldly] nature
• Clear and indistinct knowledge [ undebatable knowledge]
• Animals do not have the self -consciousness which is the important distinction between humans and others
The session then proceeded to explain Locke description of self, which was different from Descartes as he adopted empiric tradition. His ideas on
• There is nothing that the self-bring with it when it is born.
• self is conceived without any quality in the beginning, and only route it arrives at truth is through experience
• Experience – external source- processing the sensory data and then arrive at the truth. He categorised sensation as [ 1. data from external world, 2. faculty of reflection of the mind] It is one’s ability to internalise and ability to reflection characterises one from another.

He concluded his narration with the Psycho analytical notion of Self by Sigmund Freud.