“Why Economic Development and Not Just Growth”

The Department of Economics, Kristu Jayanti College organized an International Expert Lecture on “Why Economic Development and Not Just Growth” on 9th April 2019 under the leadership of Dr. Neeta Dwivedi (Coordinator, Department of Economics) and Dr. V. Muthukumar (Coordinator, Department of Commerce). The resource person was Mr. Jahir Islam, Faculty School of Economics, Finance and Management, University of Bristol, United Kingdom. Mr. Jahir Islam began his talk with an extract from Human Development Report and then explained how growth is dissimilar from development. He then demystified the various internal and external barriers that blocked growth to translate into development. Sir also stressed that we have to aim for sustainable human development and not just sustainable or human development and wrapped his speech with Leo Tolstoy’s quote: “Happy families are all alike, every unhappy family is unhappy in its own way”. His speech was followed by an interaction session between him and the audience comprising of MA Economics, M.Com and M.Com FA students and faculty members of both the department.

The session began with discussion on different crisis including Human flow with special mention of 65 million refugees worldwide. The interaction proceeded with the notion that trade is a good thing and for a smooth and efficient trade worldwide, there is WTO. But we don’t have WEO i.e. World Environment Organization to tackle the problem of climate change. The interaction continued with the understanding of different trade barriers and structural reforms taken to improve world trade. There was special remark on need of Global governance. Rise of neoliberalism was also discussed along with the consequences and emphasized on CSR as a supportive strategy in times of crisis. 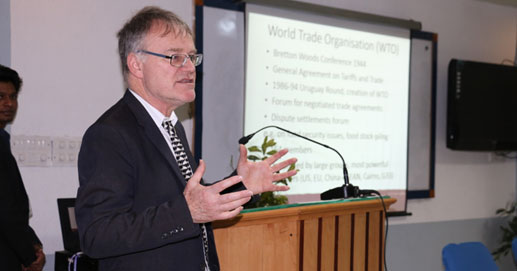 Dr. Sheri Markose, Professor, School of Economics, University of Essex, UK and Founding Director, Centre for Computational Finance and Economic Agents (CCFEA), Essex.
On
Financial Market Stability & Economic Growth
Date: 4.1.18
The session was started with welcome address given by Shama Stephen, student, IV MA Economics followed by introduction of resource person. The interaction started with brief introduction of the Centre for computational finance and economic agents followed by importance of ICT in the financial market research. The resource person has given the example of role of financial sector in Global recession of 2007-08 and highlighted the concepts of shadow banking and misleading measurement of risk. The resource person has stressed on the use of Simulation method and network method to analyse the present market situation. The students have interacted about the applicability of such methods in other related areas. The resource person also talked about systemic risk management as the need of the hour and interacted about position of India in the Global Recession Scenario.